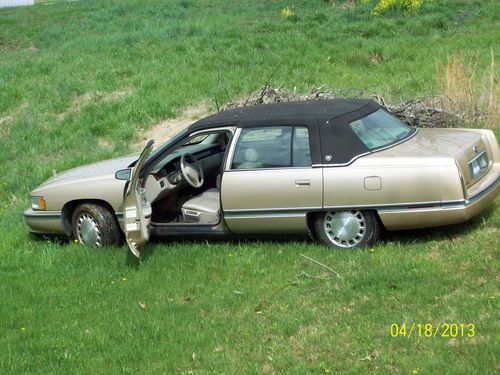 I bought this a year ago March and it's been my daily driver since then. It has the infamous "Northstar" head-lifting/overheating issue. This one pumps engine compression into the cooling system (no coolant in the oil). It runs and drives fine except - no hard acceleration allowed, no hill climbing and no driving over 50mph; add a gallon of water about every 40 miles...or when it (the dashboard) asks you to.

So...please know this is NOT truly a drivable car, it will need major engine work and it needs front pads and rotors (passenger side is starting to cut into the rotor). Technically you could use it 'in-town only' as it sits but I really do not recommend it. A/C don't blow cold. Trunk and gas-door buttons do not work. Dashboard is warped from sun damage and lifting in the middle around the defroster vent. The leather interior is in good shape but has one small cig burn on the driver's door armrest. There is a small trim piece missing from one of the door pulls. Heater core is bypassed because its leaking. I've replaced almost everything else coolant related, radiator, t-stat, w/pump, all idler and tension pullys and belts. New alternator last fall. 3 new tires with less than 10k on them. All the metal is good, the only dent is on top of the right fender (see pic).