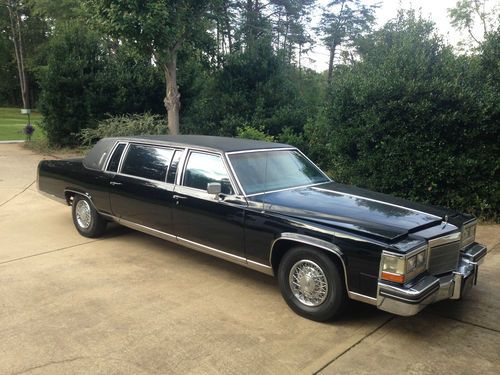 Condition: UsedA vehicle is considered used if it has been registered and issued a title. Used vehicles have had at least one previous owner. The condition of the exterior, interior and engine can vary depending on the vehicle's history. See the seller's listing for full details and description of any imperfections.Seller Notes:"1983 Cadillac DeVille Limo/family car with normal wear for this year"

1983 Cadillac Deville Limo, car was bought in 1999 for parade and fun with a Shriners unit, car was bead blasted primed and painted in 2000 all body molding was replaced also, as was a new vinyl top installed. Car runs great and transmission is smooth, car has rear air shocks and rear ac. New cd p;ayer with outdoor speakers mounted behind front grill and can be turned on and off under the dash, speakers inside have also been replaced in 2000. Car is as is and has clear title with 62000 original miles. Feel free to email any questions. Thanks