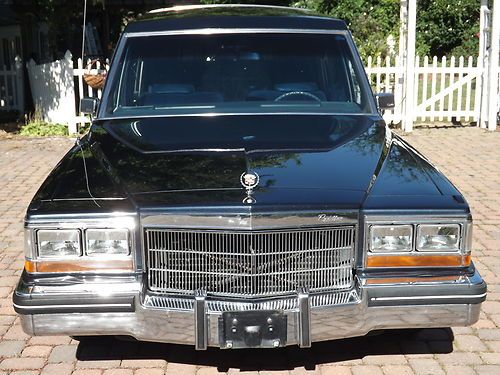 HERE IS A 1982 CADILLAC HEARSE WITH A 6.0 ENGINE. THIS WAS THE LAST YEAR FOR THE 3 WAY LOADER. THE LOCKING MECHANISM  WORKS GREAT ON THE COFFIN TRAY. THE HEARSE WAS STORED FOR THE LAST 6 YEARS. I BOUGHT IT AND DROVE IT HOME ON A 8.5 HOUR TRIP HOME. I HAD NO PROBLEMS ON THE TRIP. ALL I CAN SAY IS WHEN YOU DRIVE THIS CAR EXPECT TO GET A LOT OF ATTENTION AND TURN HEADS. IT WAS ORGINALLY BLUE. THE FUNERAL HOME OWNER TWO-TONED THE HEARSE TO MATCH HIS OTHER HEARSE. I DO HAVE A CLEAR TITLE IN HAND.

THERE IS RUST ON THE BODY AND UNDERNEATH. I TRIED TO SHOW THE RUST IN THE PICTURES. THERE IS A LITTLE RUST ON THE BACK DOOR UNDER THE GLASS. THE RUST IS FIXABLE, BUT WILL BE A LITTLE EXPENSIVE IF DONE RIGHT. THERE IS A SMALL MISS IN THE ENGINE WHEN YOU PULL UP TO A STOP. SEEMS LIKE A VACCUM LEAK. THE CRUISE DOSEN'T WORK. THE AIR CONDITIONER WORKED, BUT NOW IT DOSEN'T. I THINK IT IS LOW ON FREON. IT HAS A MANIFOLD OR EXHAUST LEAK. MAY BE A FEW MORE PROBLEMS BUT WELL WORTH FIXING.

THIS COULD BE ONE OF THE NICEST HEARSES ON THE STREET WITH A LITTLE WORK. I HATE TO LET IT GO BUT I HAVE 2 AND ONE HAS TO GO.

IF YOU WANT ONE OF THE LAST 3 WAY LOADERS THAT IS A REAL HEAD TURNER THIS IS IT.

PLEASE ASK ALL QUESTIONS BEFORE YOU BID. SALE IS FINAL. THERE IS A NON-REFUNDABLE $500 DEPOSIT REQUIRED AT END OF SALE THROUGH PAYPAL. THANKS

THE DENT ON THE DRIVERS SIDE DOOR HAPPENED WHEN IT WAS IN STORAGE. SOMEONE HIT THE DOOR WHILE UNLOADING A CASKET. THE CORNER OF THE CASKET HIT THE DOOR.THEY ALSO PUT A VERY SMALL DENT IN ONE OF THE HUB CAPS.

I HAVE BEEN TOLD SEVERAL DIFFERENT WAYS ABOUT THE 3 WAY SUPERIOR. THE 3 WAY MAY HAVE BEEN OUT UNTIL 1984. EITHER WAY THIS IS A NICE LOOKING HEARSE. WITH A SOME WORK THIS WOULD BE A GREAT DRIVER. CAR IS SOLD AS IS.