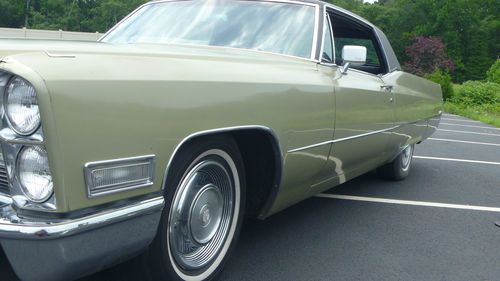 Condition: UsedA vehicle is considered used if it has been registered and issued a title. Used vehicles have had at least one previous owner. The condition of the exterior, interior and engine can vary depending on the vehicle's history. See the seller's listing for full details and description of any imperfections.Seller Notes:"has a few dings ac compressor is bad driver seat motor bad, small amout of rust on buttom of fenders see pics oh ya and its green lol"

I have had thar is car for years and has been in the family since new.great survivor car. its kept in the garage 99% of the time.hate to sell but its time.the car runs great and drives like a dream.i have replaced , brakes, fuel pump,motor mounts, starter rebuilt,  alternator rebuilt ,aluminum rad, carb rebuilt, exhaust manifolds , exhaust sytem done a few years ago.had the motor rebuilt at a machine shop <fonze performance erial, nj> the did everything in the motor. the original parts are oil pan,block,heads,valve covers,intake.everything else is new. im sure I forgot something. I have 100s of pics on my shuuterfly. I can send link cant post it on here. but its cadilacjoes at shutterfly dotcom

the interior is in great shape.. radio works, no sound took speaker wire. for kenwood radio in glove box. it just sits in there.door panles,rear seats,dash great shape front seat driver side is missing a button and is a little worn. see photos.

orginal spare tire and jack no holes in trunk or on floor pans.see pics

driver car u can drive this any where.

the bad, ac compressor is bad,but converted to 134r.

the driver seat motor is bad.

any question ask me this is for sale locally and will end action if it sells locally im open to offers. again im sure I forgot some stuff just ask I have 100,s of pics too