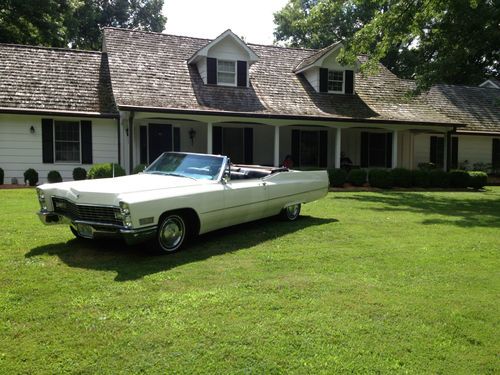 I'm listing  this beautiful 1967 Cadillac Convertible in mint condition for a friend of mine.  The car has been in his family since 1969 and his Dad was the second owner.  Always garaged and maintained.  It only has 69,726 original miles on it.  I drove this car and it handles and drives like a dream.  Starts right up and brakes good.  Owner just had it looked over at the mechanic shop.  Transmission was services 5000 miles ago and shift's great.  Air is cold as it was 85 degrees when I drove it.  It had a new paint job several years ago at a well established local body shop and still looks like new.  There are no dents anywhere that I can see and the chrome is in excellent condition.  Front seat has a little wear on the driver's side but all of the rest of the seats look like new.  As AM/FM radio and cassette with a power antenna that does not go down.   The right side mirror is missing the mirror but can be replaced.  The trunk is like new and has original spare.  All the power windows work, but the power door does not work.  The power top works well, goes up and down.  This car is like new and is a real survivor that is rare to find in this condition.  It has made a great parade car and is fun to drive also.  Also the cover is in the trunk and is like new.  The tires are good as are the hubcaps.  If you have any other questions, please do not hesitate to contact me or if more pictures are needed.  The reserve is lower than the market price and the title is clear.  The seller is motivated so it won't last long.  My credit rating with Ebay is excellent and have sold many cars for my local car club members.  Thank.  Dave @ 573-979-3454