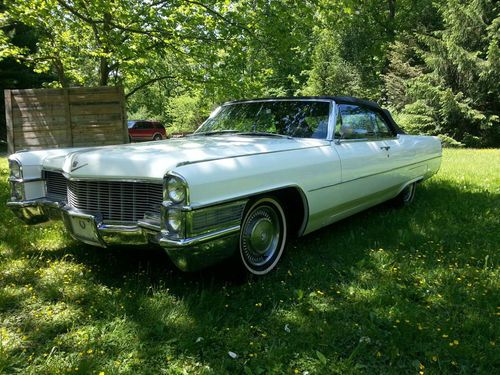 1965 Cadillac DeVille Convertible.  This car is amazingly beautiful...it is not been butchered.  It is totally original...It still has bias tires on it!

This car is laser straight with only 58000 miles on it!! Car runs and drives beautifully.  I think the pictures will speak for themselves.  The interior is all original.
Chrome is all good.  Draws a crowd where ever I take it.  The car will need the a/c serviced and two new front tires. (You can feel the flat spots from sitting in the garage throughout
the years).  This car is really one of the last of the clean original survivors.  A great investment vehicles.  This car is 2 years shy of it's 50th birthday and she is still as pretty as she
came off the showroom floor.
Any questions call Bobby 610-360-7291