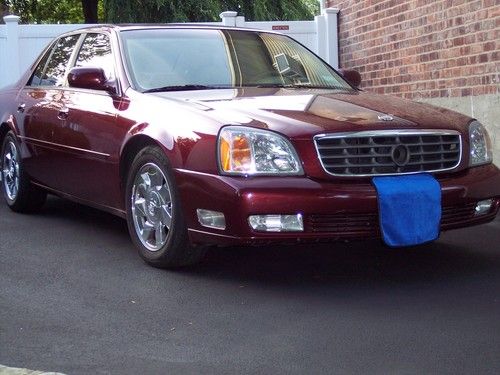 Up for auction, No Reserve !!!   2002 Cadillac DTS  , Fully loaded , plus comfort package , sunroof , 6 cd changer , chrome wheels , and night vision. Total cost when new was $55,700.00. Finished in metallic Cabernet  with Shale leather interior .Every thing works as it should , tires still have plenty of tread left , no rips or tears inside, Tinted windows  .Runs and drives great .Transmission shifts great , all glass is perfect , gets 18mpg city, 27 mpg hwy. Front wheel drive is great in the snow , plenty of room for the family and very large trunk. This Full size family car has on 79k original miles , which is low for 11 yrs old .Three owner car , just bought a new SRX , so this will need to go . No RESERVE , SOLD AS IS . Please e-mail with any questions , or leave message on cell 631-873-9306, Gary .Good luck bidding !