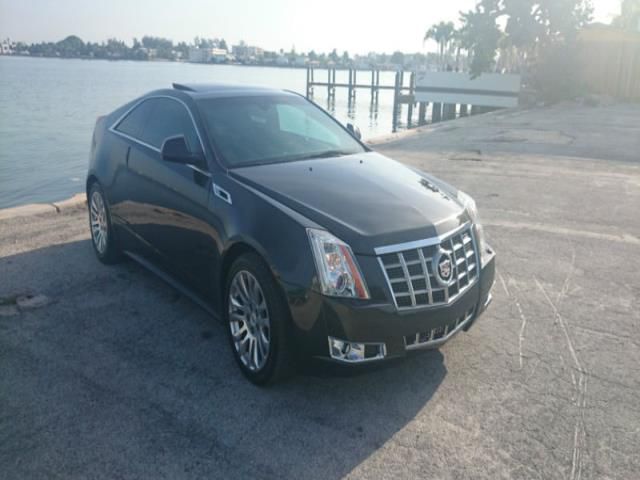 UP FOR SALE ONE OF A KIND 2012 CADILLAC CTS COUPE WITH PREMIUIM PACKAGE! CAR HAS ORIGINAL BLACK DIAMOND EXTERIOR WITH BLACK INTERIOR, LOADED WITH ALL OPTIONS POSSIBLE; TOUCH SCREEN NAVIGATION SYSTEM MOTION H.I.D HEADLIGHT SUNROOF BACK UP CAMERA RARE PARKING SENSORS STEERING AND WOOD TRIM BLUETOOTH HEADTED AND COOLED SEATS XM RADIO AUX & USB CONECT ONSTAR ENGINE REMOTE START KEYLESS ENTREE FOG LIGHT BOSE PREMIUM SROUND SYSTEM 306 HP DIRECT INJECTION AND MUCH MORE TO LIST... THIS BEAUTIFULL CADDY WAS PURCHASED FROM INSURANCE COMPNAY WITH A MIOR ACCEDINT TO THE LEFT PASSENGER SIDE! FRONT BUMPER AND FENDER WERE REPLACED FROM LOCAL CADILLAC DEALER IN MIAMI, AND THE CAR BEEN RESTORED TO ITS ORIGINAL SHAPE! NO FRAME DAMAGE OR ANY AIRBAG DEPOLYED! PICTURES BEFORE ARE AVALIABLE! SUPER HEALTHY CAR , DRIVE PERFECT WITH SUPER LOW MIES! NO MECANIC ISSUES WHAT SO EVER! INTERIOR IS 9/10 AND PAINT IN PERFECT SHAPE! CAR IS READY TO SELL! SUPER RARE COLOR TO FIND! FEEL FREE TO INSPECT THE CAR! ONLY SERUOIS BUYER PLEASE! WILL HELP PROVIDE SHIPPING IF NEEDED! YOU CAN REACH ME AT 786-387-8607