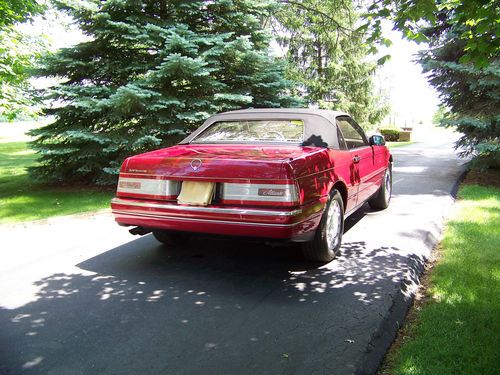 You are bidding on a 1993 Cadillac Allante. This car has the North Star Engine. which was only used in the 1993. I bought the car in 2006, from a dealer in Louisiana. The car has 46,100 miles on it , and is in better than most cars its age. And has won first in its class in several car shows. The interior is good with no tears and the top looks like new. Their is some wear on the drivers seat from sliding in and out. The car has spent all its time since I bought it inside a climate controlled garage, never driven in the winter time. I have put 3600 miles on the car. Its sporty, Its fast, and I would never sell it if it were not for the fact that I suffered a spinal injury, and cannot get in or out of the car with out help.I expect a non refundal deposit of 1000.00 within 48 hours of the end of the auction via paypal, and the balance by cash,wire transfer, or a cashiers check within 7 days of the end of the auction. The car is for sale locally, so the this offer may be with drawn at any time. Delivery to the buyer, is the buyer's  responability. . Thanks for looking.