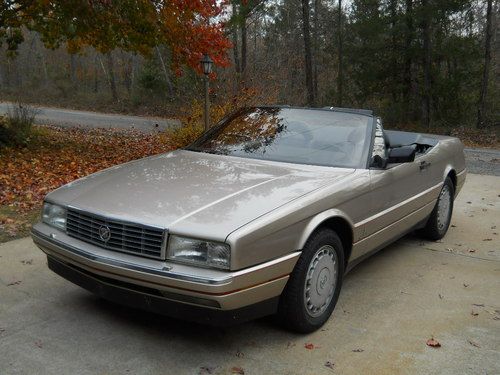 Great "Flying Cadillac" ... gets 21-22mpg, 109,000 original miles (I bought it with 104,000 miles on it and have driven it for 5000 miles), had new Robbins top added to it 4 years ago, new Bose amplifiers in stereo system, Air conditioner/automatic temperature control works great and has been updated/ converted to 134a Freon ... new set of tires and alignment 4,000 miles ago.. has service manual from Cadillac included, owners manual intact in glove box. side covers for the top down position are with the car ....  rare 'gold metallic' paint code ... runs and drives great, ...   originally had the Clifford alarm system option installed, but is not currently working ... no remote door lock system working which was part of the Clifford alarm system... power door locks do not work currently so will require a little repair/research to fix.... drivers information system works great, but the LED display unit that displays the info has a few 'pixels' out (picture attached)... can be repaired... Sold as is, no warranty, like most used vehicles...clear Arkansas title... deposit is required within the stated time frame if you win the auction, and full payment as arranged by me and the buyer...Paypal accepted for deposit...cash or certified funds for remainder before car is picked up or transported... if you need additional pictures, information, or have questions, send me a message ....  if you want a great 2 seat, sporty, rare, fantastic handling car this is the one.....    hard tops are available on the market if you wanted to give it the ultimate touch ... these cars had a list of options a mile long including electronic ride control, automatic temperature control, the 1990 through 1992 models also have Recarro 10 way power memory leather bucket seats, power trunk latch, cd/cassette/am-fm stereo wired with Bose sound system, power antennae etc....   Clifford alarm system could be reinstated and a remote purchased (the original was not with the car when I purchased it) to give you added security and remote door locks and trunk system.... all offers will be considered if you want to contact me via ebay messaging...thanks for looking....