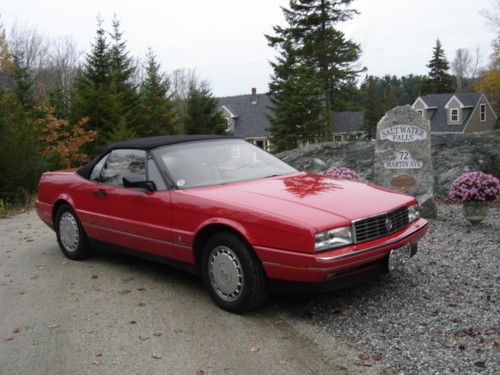 THIS IS A MUST FOR A COLLECTOR.WE PURCHASED THIS VEHICLE IN 2006 FROM A BROKER FOR THE OWNER WHO ALSO BELONGED TO THE ALLANTE CLUB.IT IS A FLORIDA CAR.THE ELDERLY GENTLEMEN WE PURCHASED IT FROM DID NOT USE IT MUCH AND NEITHER HAVE WE.WHEN WE BOUGHT THE CAR WE ORDERED NEW ORIGINAL TIRES ALSO THE ROOF HAD A SMALL TEAR (KNOWN IF NOT CAREFUL) WE ORDERED THE ROOF MATERIAL FROM GERMANY AND HAD A PROFESSIONAL INSTALL IT.THE CAR IS BEAUTIFUL AND RUNS AND TURNS HEADS.AT PRESENT IT IS IN OUR SUMMER HOME HERE IN THE BAR HARBOR AREA OF MAINE.IT WAS FEATURED IN OUR LOCAL PAPER AND ONE FIRST IN ITS CLASS AT A LOCAL AUTO EVENT.I HAVE BEEN A CAR COLLECTOR FOR OVER 60YRS AND BY FAR THIS IS A BEAUTIFUL AUTOMOBILE.I AM 80 NOW TIME TO LET GO OF THE CLASSICS.I WOULD HELP WITH SHIPPING IN U.S.ONLY.IT COMES WITH ALL ORIGINAL MANUALS,KEYS,ETC. NOT TO BE MISSED.(IT IS IN STORAGE BUT WILL BE SERVICED AND DETAILED BEFORE IT GOES)

"Our strategic plan is a pathway to earn customers for life and create significant shareholder value in the process." - Mary Barra
General Motors laid out ambitious plans on Wednesday to become the world's "most valued automotive company," a goal it says it can reach by strengthening its business in China, rebuilding the Cadillac luxury brand and fixing the foundering GM Europe operations.