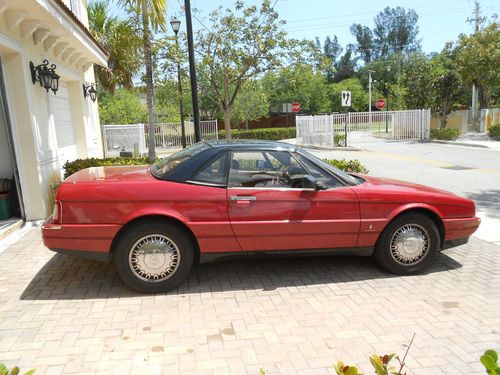 Offered with NO RESERVE is my Classic 1987 Cadillac Allante convertible with a freshly painted Black hard top. First year of the Allante.

Only produced from 1987-1993. Runs and drives great for a 26 year old car. Starts right up.
COLD AC. Heat works great Both AC & Heat Blow strong! Paint is sharp allover. Straight body. 114000 Miles
New front rotors & pads. ABS braking system & Electric dash serviced in the last 5000 miles by Qualified Allante Specialist in South Florida.
Chrome Cadillac Rims. Soft top & glass back & side windows are there & go up & down but needs work see photos.
Interior pretty good but needs work see photos,  driver seat & armrest show 26 years of wear passenger seat is good.
Over all this is a pretty good daily driver that you can restore as you go.
Call me with any questions or to set up a time to come at take a look 305 305 4608 9am-8pm Eastern
This is a used car & it does run & drive great but it is a 26 year old car being Sold As is no warranty or guarantee implied.
$500 non refundable deposit due within 24 hours of auction ending balance due via Cash or Pay Pal within 5 business days of auction ending.
Private seller NO DEALER fees apply.
I am selling this car locally & have the right to end this No Reserve auction at any time for any reason.
Thank you for your time & consideration!
Happy Bidding!