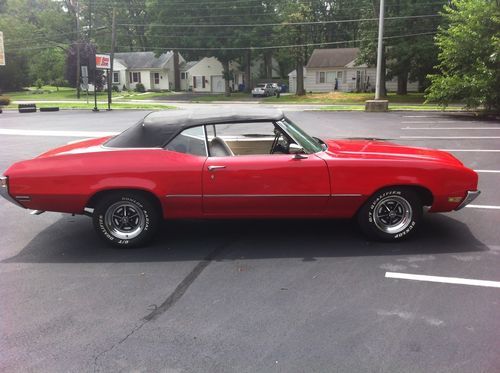 Condition: UsedA vehicle is considered used if it has been registered and issued a title. Used vehicles have had at least one previous owner. The condition of the exterior, interior and engine can vary depending on the vehicle's history. See the seller's listing for full details and description of any imperfections.Seller Notes:"There are some minor bubbles on the metal of the quarter panels. The door panels are worn and the interior needs some work."

I am the third owner and purchased this car in 1993. It was restored in 1997 and has been garage kept since then. The bumpers are in great shape and the car has all new metal except for the quarter panels where there is some minor bubbles showing. The interior is original and needs some work done. The top is in good shape and the convertible motor works fine. It has the original factory rims. There is no rust on the car or on the frame. The front-end was completely re-done (springs, ball joints, shocks). It has the original motor and runs extremely strong and smooth. I try to drive the car at least once a month so it is very sound and can be driven anywhere. Any questions, call Jeff at 856-217-7030. NO EMAILS PLEASE!