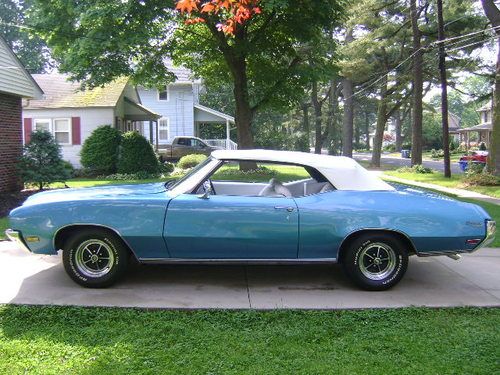 THIS 1970 BUICK SKYLARK CONVERTIBLE HAS 67111 ORIGINAL MILES, THE BUICK  WAS ORIGINALLY FROM CALIFORNIA, AND CAME TO EAST IN 1998 TO A GENTLEMAN IN CONN., THAT DID NUMEROUS HOURS OF WORKED ON THE SKYLARK CONVERTIBLE. (DOCUMENTED IN A LOG, THAT IS PART OF THE DOCUMENTATION). THE CAR WAS THAN SOLD TO A GENTLEMAN IN LANGHORE PA. , WHICH OWNED IT FOR 9 YEARS, AND HE ALSO WORKED ON THE CAR FOR ALL THE NINE YEARS, TO GET IT TO ITS PRESENT CONDITION. THE CAR HAD 55K ON IT WHEN RECIEVED IN CONN., AND 61K WHEN RECIEVED IN LANGHORE PA. THE VEHICLE CURRENTLY HAS 67K.

I WILL TRY TO DESCRIBE AS MUCH AS POSSIBLE ABOUT THE BUICK.  THE CONVERTIBLE TOP IS NEW, THE PAINT JOB IS NEW, THE INTERIOR IS NEW, THE FRONT AND BACK BUMPERS ARE NEW,  THE MOTOR IS IN EXCELLENT CONDITION, (RUNS PERFECT), THE TRANSMISSION WAS RENCENTLY REBUILT, RUNS GREAT. THE COMPLETE SUSPENSION HAS BEEN REBUILT. THE MOTOR WAS REMOVED FROM THE CAR, TO DO SOME WORK ON IT, AND TO DETAIL THIS AREA. THE TIRES AND WHEELS ARE LIKE NEW, THE BUICK HAS NEW EXHAUST, WITH A VERY NICE SOUND. THE CAR HAS LARGE FRONT SWAY BAR AND STANDARD REAR SWAY BAR, BORROWED FROM A CHEVELLE.  ALL BUSHING REPLACED.  THE FLOORS ARE ROCK SOLID, ALONG WITH FRAME, AND UNDERCARRIAGE.  THE CARPETING IN THE CAR IS PERFECT.  THE CONVERTIBLE TOP MECHANISMS ARE NEW , AND ALL FRAMING REBUILT.  THE LIST OF PARTS REPLACED ON THE CAR FROM INTERIOR, TO EXTERIOR ARE ENDLESS, FROM ALL DASH PARTS, TOO ALL OUTSIDE MOLDINGS ETC.

NOW FOR THE BAD PARTS, THE HOOD NEEDS REALIGNMENTjUST DRIVER SIDE, YOU CAN SEE IN PICTURES), THE PAINT HAS THREE FLAW, WHICH MOST PEOPLE WOULD NEVER SEE.

OVERALL, I THINK THIS IS THE NICEST 1970 CONVERTIBLE ON EBAY, ITS RUNS PERFECT, AND LOOKS LIKE A SHOW CAR, TOP TO BOTTOM. THIS CAR IS A TURNKEY OPREATION. NEEDS NOTHING. IF YOUR LOOKING FOR A CONVERTIBLE OF THIS NATURE, YOU WILL BE AMAZED.  ADDITIONAL PICTURES AVIALABLE. THANK YOU FOR LOOKING, AND HIT ME UP IF YOU HAVE ANY QUESTIONS, MY NAME IS NICK AND MY CELL IS 609-509-4583