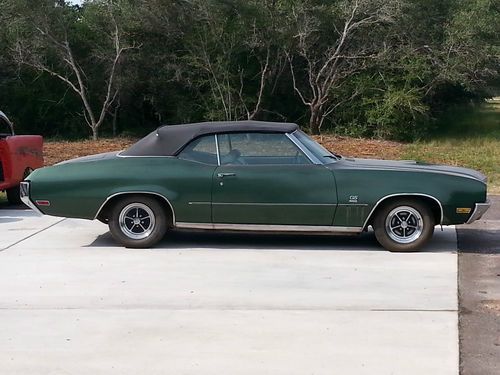 Condition: UsedA vehicle is considered used if it has been registered and issued a title. Used vehicles have had at least one previous owner. The condition of the exterior, interior and engine can vary depending on the vehicle's history. See the seller's listing for full details and description of any imperfections.Seller Notes:"Small Dent driver door and fender, various dings,rust in trunk pan, and body under pass door sill,ITs a Barn Find unrestored ,unmolested."

Its one 1416 Convertible Built ,Its one of 122 Built in Sherwood Green, and one of 9 Built with options this car has.
Its had 2 Owners, It Comes with the original Owners Manual and protecto-plate listing Original Owners Name and address.
Its a GS 455.
The interior is in very good original shape as well as dash.
It has Power windows, Locks , Power Top , The Exterior is original so expect 40 yr old paint,various chips and dings.
The picture's were taken yesterday. So they represent what your gonna get .
It Comes with the original Owners manual and protecto Plate with original owners name and address.
The Engine and Transmission are Numbers matching and original.
What you can't see is it needs a trunk pan, and pass door sill under door has some rust.
The Car runs and drives ,however its got a miss, could be in need of plugs,or a wire.
Over all its a very cool car that could be driven after a tune up as is, but it should be restored which was my Intention.
I'm not Gonna Live Long Enough to get to all the cars I have,so I'm selling a few, It was my intent to do the Other Convertible I will be listing, So my Daughters could drive them to school. (Somehow) My Idea of Cool isn't gonna be their's so I'm selling Them. They will be Listed seperately but could be bought as a pair For the right offer. (the Other Car is GS 350 Convertible ) But you can see my other Auctions to read about it.
This is a NO Reserve Auction Last Bidder will Own It. Its a 43 Year Old Car ,Its Never Been Restored.
The Last Car I sold I explained it needed Paint. He Left me Undue negative feedback, I told him the car needed paint regardless of what pictures the indicated. Meaning I told him in pictures it looked great,in real life it was a 10 ftr .Then after I left him Positive feedback, he tried to extort a partial refund for a paint job under the threat of negative feedback. Which he left. As I told him to take a hike.