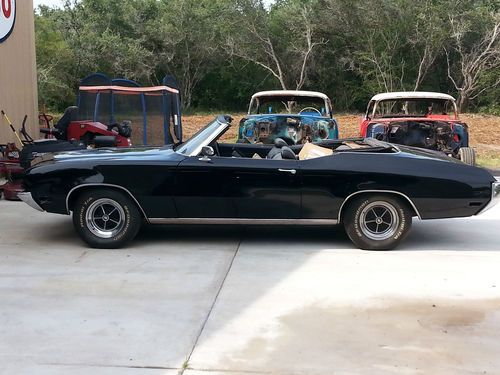 Condition: UsedA vehicle is considered used if it has been registered and issued a title. Used vehicles have had at least one previous owner. The condition of the exterior, interior and engine can vary depending on the vehicle's history. See the seller's listing for full details and description of any imperfections.Seller Notes:"Chips in paint, Top Needs replaced, Needs TLC, Will Run, But not in its current state."

This Auction for a 1970 Buick GS 350 Convertible, It Currently Does not Run, It would need Spark Plug Wires, Probably the Carb. Rebuilt And Old Fuel removed from Tank. It Drove into My Shop 4 yr's ago under its own power and sounded Fine. It did have a rotten exhaust system under it that was taken off.

This Going to be a project. It had just been painted when I got it, However the paint has some chips here and there. Its Air Conditioned car, however the compressor is not on it or here.It does have the mounting bracket in the trunk.

It will come with a new GS  Grill in box($500) New Side Markers and various GS Emblems that are new. I think some 455 emblems as well, I'm going to forward what I have.

It was my intent to clone it into a GS 455 Car or Get some white GSX Stripes and install on this Black paint, The paint job isn't Bad, and it Great. It Looks Good. I have not done anything to the car since owning it other than cut the exhaust off and Borrow the Spark plug wires off of it.

It needs a New Top  it is ripped ,It does have a power top that worked fine ,upholstery is probably original, no major tears, just well worn. Plan on replacing to suit yourself

I believe the engine had recently been rebuilt, it didn't smoke, knock or miss. But as Stated its been sitting for 4 yrs, The body is straight. The doors close good its got some surface rust in dash corners near A pillars, none that goes all the way thru. Its a good restorable car.

The trunk Pan has either been previously replaced or really in good shape, I'd lean to has been replaced. But can't say for sure.

As mentioned I was going to clone it into a 455 car, So I wasn't real concerned about its current Drive train. The Bumpers are straight and will need a re-chrome. What you see in pictures is what you will get. the pictures were taken 2 days ago.

If you are looking for a GS 455 Convertible see my other auction.

I will help get it on a transport, I'm not going to get it running ,So when arranging pick up keep that in mind. Think -Winch. I do have a tractor that could push it onto a car trailer. but a winch is going to be best plan, and most transporters are geared up for this, you just need to tell them in advance.

Its a Neat car that would be great for someone to get running and cruise around or restore. Your Choice, my intent was frame off restoration. To many Projects and not enough time.