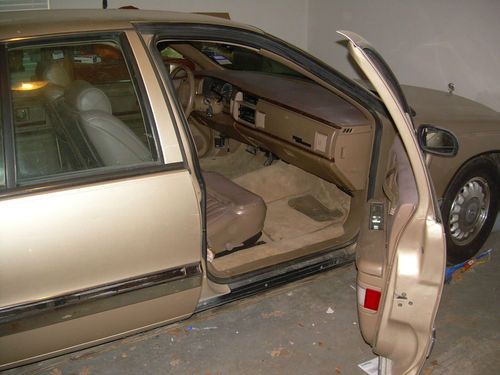 Condition:
-Last driven 3/2012
-No Battery
-Front Right Parking Light Cover Broken, Crack in Front Bumper on right side, and trim loose on bumper on the right side (see pic)
-AC compressor needs to be replaced (leaking won't hold a charge)
-lock for trunk missing (see pic, have Buick emblem)
-Blower motor not working
-rubber missing on most exterior door guards-plastic interior trim insert missing on front doors (above handle)
-drivers door has been replaced and paint does not match exactly (can tell in the sun from a distance)
-There are three or four holes where a canvas roof cover was attached to the drivers (replacement door)
-Runs and Drives Great, LT1 Engine strong (no smoke)
-Transmission rebuilt and has approx 30K ago
-Tires and wheels are good
-Class III trailer hitch
-Aftermarket Rear Spring Air Bags

History:
-Car originally form Austin I think
-Bought in 2001 from a widow to a retired police officer

Shipping and Payment
-Car for pick-up only (I can temporary put a battery in it to load it if necessary)
-Cash, Personal Check (once cleared), or Cashiers check due within 7 days of auction close