Near Hollandsburg, IN, United States 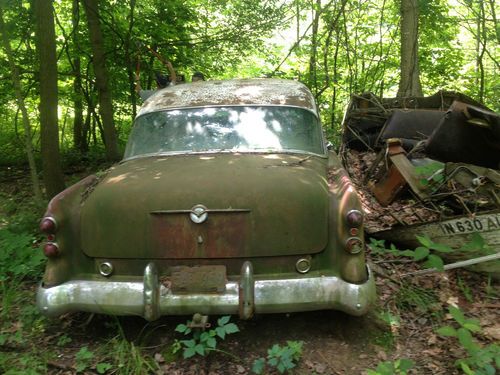 Condition: UsedA vehicle is considered used if it has been registered and issued a title. Used vehicles have had at least one previous owner. The condition of the exterior, interior and engine can vary depending on the vehicle's history. See the seller's listing for full details and description of any imperfections.Seller Notes:"This car has been parked since the mid-70s. It was running at the time and was parked because the transmission wouldn't work in reverse. Bought another car instead of putting money into this one. Pictures show car conditions - engine hasn't been cranked in decades."

Selling this car for my dad. It is a 1954 Buick Roadmaster that has been parked since the mid 1970s.  It was running when he parked it.  He parked it because the transmission wouldn't go in reverse.  There are lots of original chrome parts that are in good shape - you can clearly see them in the pictures.  Most windows / glass still in tact - also can see in pictures.  Doors are stuck closed and will require some work to get inside.  Car is for sale in its entirety and of course sold as is where is - to be clear you will need to take the whole car.  Car is located in west central Indiana.  Happy to respond to questions.  Know what you are buying and how you will move it before bidding.