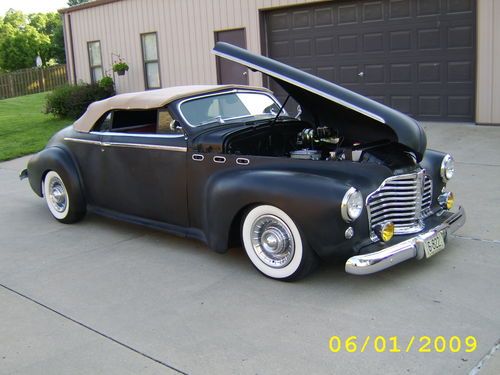 This is a old hot rod I bought in Detroit a few years ago.  It started out as a 1941 Buick Roadmaster Coupe and someone turned it into a folding top convertible. I had a rebuilt 400 cu. in. Chevy engine installed and a 350 Turbo. It has a Nova subframe with disc brakes, Nova rear end, alum. radiator, power brakes, power steering, air conditioning,1956 Oldsmobile dash, Corvette Steering wheel, new exhaust, new interior, new top, bumpers rechromed, grill rechromed, Diamond Back Tires, Cadillac Wheels, and a radio. The fog lights are no longer on the car. The top is manual. I reserve the right to remove from Ebay at any time.