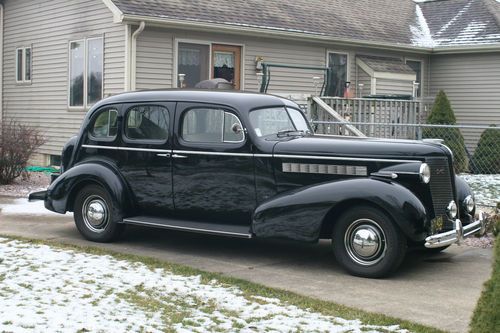 History--Built in Flint,Michigan in July, 1937, this car has a long time history in and around Goshen, Indiana. The engine (71,600) was rebuilt in the early 80's as was the completion of any body and paint work.  The car received a new fuel pump, radial tires and tubes in 1982.  The steering wheel was also restored with a leather grip. In 2005, the car was sold to a buyer in Clio, Michigan.  In 2010, the vehicle was sold again--to my father who resides in Clio, Michigan.    Condition: The car is in original condition. The numbers on the engine and frame are matching.  All chrome is in very good condition.  The headliner is in good condition.  The interior has never been restored.  There is "wear" on the seats and at the bottom of each door panel.  The carb was rebuilt in 2010. All guages (except the radio) work.  The exterior paint job looks good. The car was repainted years ago (don't know exact date).  There are 2 small dings in the right front fender as well as a small scratch.  All Windows work.  An original "VOTE FOR ROOSEVELT sticker" is in the rear window.  All lights (head, fender, and fog) work. The fender lights have been converted to directional signals.  The car possesses a heater, but the owner does not know if it works.  In 2010 while returning home from Back to the Bricks (Flint, Mich.), the owner outran a rain storm by traveling 75 mph. and there was room for more speed.  The 3 speed transmission and 4 wheel hydrolic brakes work well.  The horns work well.  The parking brake has never been tested. There is a spare tire, but the vehicle does not have a jack. It also comes with reprints of  the owner's  manual and shop manual.  Payment:  Deposit of $500.00 within 24 hours of auction close.  Full payment required within 7 days of auction close.  Shipping:  Buyer is responsible for vehicle pick up or shipping. For the record, the 1937 Roadmaster Series 80 had 3 classifications of cars:  the 37-80C which was a convertible Phaeton--trunk in back; the 37-81, a 4 door sedan with the trunk in back; and the 37-81F, a 4 door formal sedan with the trunk in back.