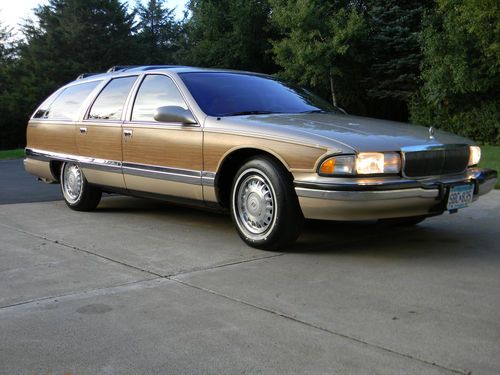 Condition: Used: A vehicle is considered used if it has been registered and issued a title. Used vehicles have had at least one previous owner. The condition of the exterior, interior and engine can vary depending on the vehicle's history. See the seller's listing for full details and description of any imperfections. ...
You are looking at a very nice, 2 owner, 1996 Buick Roadmaster Estate Wagon- 25th Anniversay Collector Edition.
There are only 104,000 miles on it.  Clean CarFax with an accident free history.  It runs and drives great.  Very tight front end.  The 5.7L V8 runs excellent and transmission shifts smooth.  It will need a break line.  It is fully loaded with leather and all power options.  Sometimes rear windows and passenger side window work intermitently/or are slow.  Leather interior is like new.  No rips or tears.  The door panels are in excellent condition.  It has the 3rd row seat, roof rack, and glass roof.  Does have a very small amount of rust behind wheel wells, NOT above nor in front, just right behind the back rear wells.
I can email you a copy of Carfax if you can't view it on ebay.
Let me know if you have any questions or would like to set up a time to come see it.  Thanks for your time and have a great day!