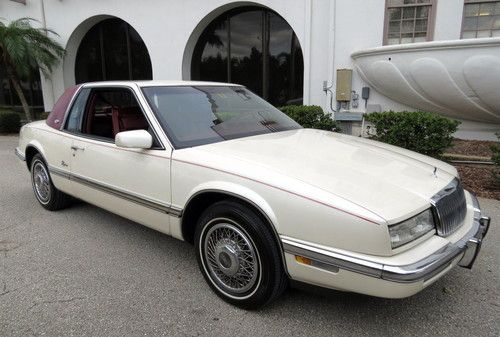 This is an immaculate classic Buick Riviera Luxury Coupe. It has a Diamond White exterior and a Burgundy Leather interior.  The paint is original, never wrecked or repainted. The interior is in flawless condition, no tears, cuts or wear spots.  The car was bought in California in November of 1988 by a doctor.  He drove it for over 20 years.  When he passed, the car was given to his son in New Hampshire. After 1 year in the Northeast and $6,500 in mechanical repairs and upgrades, the car was sold to a Classic Car Collector in Ft. Myers, FL.  I bought the vehicle in August of 2012.  Since I've owned this treasure, I have replaced the radio amplifier, speakers and power antenna .  The retail value of this car is about $6,000 with average condition and mileage.  This car is in well above average condition and has been driven less than 5600 miles per year.