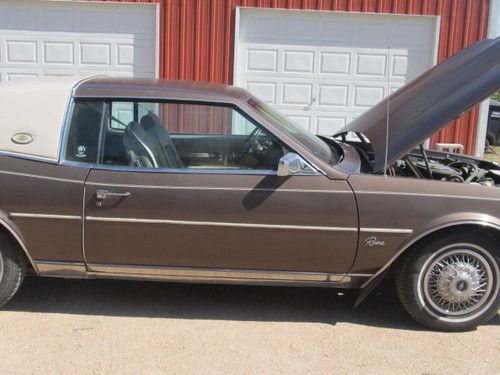 Condition: UsedA vehicle is considered used if it has been registered and issued a title. Used vehicles have had at least one previous owner. The condition of the exterior, interior and engine can vary depending on the vehicle's history. See the seller's listing for full details and description of any imperfections.Seller Notes:"this car is a classic time piece, owner lives in Nebraska out in the country there are some areas of chipped paint due to country roads the plastic below the headlights are broken,"

I am selling this car for a friend who lives out in the country in Nebraska, He is the second owner who purchased the car at an estate auction. The Buick registered 24,000 actual miles. He has driven it 25,000 miles before restoration to confirm mechanical condition. It has the original 307 cubic engine which has run exceptional without having to add any oil. No rust.

The things that he has done to it include  Complete engine tune-up, Air Conditioner rebuild, Replaced battery, Replaced vaccum system, Replaced head liner, Replaced Shock Absorbers The Tires are P205x75R15 Goodyear brand.The color is Metallic Brown and a Biege Vinyl top which is in excellent condition. However the Brown paint should be repainted, The rear expansion panel between the bumper and the chasis has been replaced. and the Radiator repaired. Items that are needed are as follows Windshield, muffler and tail pipe, Radio plays when it wants to, some interior lighting not working,  Interior panel on front between bumper and chasis needs repaired, Interior mirror adjusting controls not working.  The winning bidder is responsible for making all arrangements for shipping and all charges associated with it, Payment in full is required within 5 days for the ending of this auction.  Vin Number for this car is 1G4A257YOEE432712