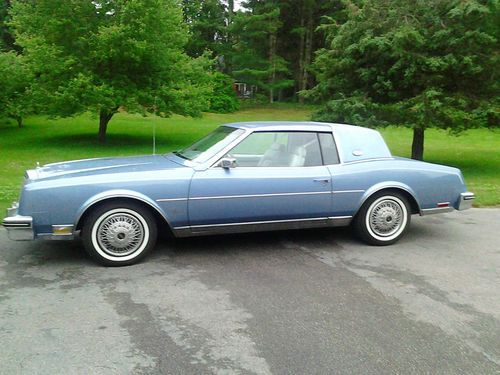 YOU ARE VIEWING A 1980 BUICK RIVIERA TWO DOOR COUPE, BLUE WITH OYSTER LEATHER AND PAINTED PINSTRIPE. THIS RIVIERA HAS 58,199 MILES, I HAVE THE TITLE TO PROVE THIS. THIS CAR IS POWERED BY ITS ORIGINAL NUMBERS MATCHING 350R GAS FOUR BARREL NON- FUEL INJECTED ENGINE, (THE 350R ENGINE IS RARE INDEED, MOST CAME WITH THE 305 GAS ENGINE). THIS ENGINE I  MUST SAY IS WHISPER QUIET. I JUST INSTALLED A DATE CODED  FACTORY  SET OF DELCORE PACKARD  IGNITION WIRES TO REPLACE ITS ORIGINAL ONES. ALL OF THE WIRE SEPARATORS ARE PRESENT TO KEEP THE WIRES OFF THE ENGINE. THE FACTORY HOSE LOOMS (GM ZIP TIES) ARE ALL PRESENT. MOST OF THE HOSES ARE ORIGINAL, ALONG WITH THE  ORIGINAL T -CLAMPS. THERE IS A BRAND NEW DELCO BATTERY, THE HOOD PAD IS ALSO BRAND NEW. THE CAR HAS ICE COLD A/C. THIS RIVIERA'S TRANSMISSION IS ORIGINAL, AND SHIFTS THROUGH ALL OF THE GEARS PERFECTLY WITHOUT HESITATION. THERE ARE NO DRIPS, NO LEAKS, NO WEIRD SQUEALS, PERIOD. THIS CAR IS LIKE DRIVING A NEW ONE, I HAVEN'T SEEN ONE THIS CLEAN IN YEARS, NOR HAVE I  EVER OWNED ONE THIS CLEAN. IT HAS THE ORIGINAL GM FULL FACTORY MATS (FRONT AND BACK) WITHOUT ANY WEAR ON THEM AT ALL... AMAZING... ALL OF THE OPTIONS WORK EXCEPT THE CLOCK AND ANTENNA, WHICH CAN BE HAD HERE ON EBAY VERY INEXPENSIVELY. THE INTERIOR IS PERFECT, CRACK FREE, NO STRESS ON THE ORIGINAL LEATHER AT ALL. THE DASH IS PERFECT, ALONG WITH THE CARPET AND THE HEADLINER IS ALSO WITHOUT FLAW. I HAVE THE ORIGINAL BROADCAST SHEET (BUILD SHEET, SEE PICTURES) FOR WHEN MY UNCLE PURCHASED THIS NEW, THE CAR WAS REPAINTED  BY BUICK, WHEN IT WAS NEW, DUE TO A DEFECT IN THE FINISH, THE PAINT IS ABOUT AS CLOSE TO FLAWLESS AS YOU CAN GET WITH NO RUST, OR SCRATCHES THAT I CAN SEE. THIS CAR LOOKS BETTER THAN THE PICTURES IF YOU CAN BELIEVE THAT. IT SPORTS THE CORRECT WIDTH WHITEWALLS, ALL FOUR ARE LIKE NEW.  THIS IS A SHOW CAR, BUT THAT IS MY OPINION, I DOUBT THERE IS ONE AS CLEAN AS THIS, IF YOU WANT A CAR FROM THE EARLY EIGHTIES THAT RUNS AND DRIVES LIKE NEW THEN THIS IS IT. YOU MAY TAKE THIS CAR TO THE MECHANIC OF YOUR CHOICE (WITHIN 15 MILES OF MY HOME) BEFORE THE AUCTIONS END, NOT AFTER. I WILL MAKE MYSELF AVAILABLE TO ANY CARRIER YOU MAY CHOOSE TO USE, IN THE EVENT  OF A MOBILE TRANSPORT. THAT WOULD BE FUNDED AT YOUR  EXPENSE. I REQUIRE PAYMENT WITHIN SEVEN BUSINESS DAYS, THIS IS TRULY A ONCE IN A LIFETIME FIND, I AM NOT A MECHANIC AND EVERYTHING EXPRESSED HERE IS MY OPINION. IF YOU ARE LOOKING FOR A CHANCE TO BUY A BEAUTIFUL RIVIERA ,THEN LOOK NO FURTHER , THIS IS YOUR CAR. THANKS FOR LOOKING!