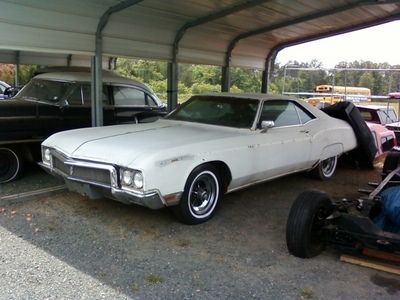 Up for bidding is a 1970 Buick Riviera with the 370hp 455 bigblock from the factory only in 1970.The trans has been rebuild !It has power seats,power windows tilt,ac power steering!It has been sitting for year and half and was running and driving fine.This is a project car that will need floor pans on both sides of front floor! I have the fender skirts also the caps that goes on the mag wheels.Overall body shape is bad and rusted out.It will need a front windsheild that still can be brought.Must sell and thanks for bidding,