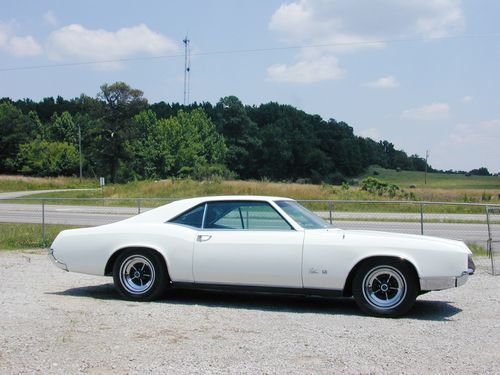 As always,  I will consider any reasonable offer to end early

Since turning 70, my family has been encouraging me to sell most of my personal cars, so I am motivated by them to sell

Several years ago,  I spotted this Riviera Gran Sport for sale by Jerry Hammer at  GM Obsolete in Phoenix, and I had to own it when I saw that it had the ultra-rare Factory MZ Code engine.

Buick only built 179 of these engines  , as a special advertising program ,

and if you don't know about them, you can easily follow these links

The car was a beautiful West Coast survivor that had also been TLC'd and primped by Jerry , who is well known in the Riviera World

After unloading it from an enclosed carrier, the car was driven to cruz's and shows, then sent to the CarNut Museum , Birmingham, where it stayed on display for a year or so.

Upon it's return, I decided to upgrade even further the condition of the car,  and so had the White Pearl repaint removed, and returned the car to the correct Buick Artic White.  No cheap paint job,  the car was primered with special DuPont white primer,  and finished with the best DuPont base/clear, with the multiple coats of clear blocked  between coats.  Hood removed, and totally refinished underneath.  New hood insulation pads installed.  The engine compartment was pretty nice when we got it,  but we redid all the black surfaces with a lot of hand sanding and the correct Eastwood Underhood black matte,

The Windshield had a couple of small chips, so I had it removed, and replaced after the paint job

The front and rear bumpers were decent,  but we sent them to Mike in California and had them re-chromed.

When we reinstalled them, all the Silver Argent trim was carefully redone with special base/clear, including the bumper filler pans, top and underneath, and the headlight trim rings.

The interior was in nice condition, except the carpet kick panel on the drivers door had some wear, so we had the upholstery shop professionally replace that piece.

Doorjambs, etc were re-painted , of course,  and new rubber door seals , as well as the trunk seal

The top cowl panel was removed, and refinished underneath, as well as the inside of the cowl area and firewall, with special black matte from Eastwood

As nice as the car is, like all 'survivors, it is not flawless.  The horn ring is missing from the steering wheel..I never thought to look for one. Also I have not replaced the cardboard trunk side panels ( they are still available).  The chrome on the original wheels has a few thin spots,  but looks good overall, and the rare Riviera center caps are in nice condition. The rest of the chrome and stainless is in nice condition except the two small pieces in the rear are a bit pitted ( not so noticeable) , and could be redone in the Winter. The cardboard piece near the inside of the rear window is a bit out of place, but hardly noticeable..  Buick used premium upholstery materials, and the upholstery is in nice condition, with just a small amount of wear on the passenger seat edge-piping.

Besides doing a great job detailing the motor, etc, Jerry did a fine job on the undercarriage, including all new free-flow exhaust. We didn't do any underside refinishing, except the bumper brackets, when we re-installed the bumpers

I have obviously tried to be a detailed as possible in describing the car, but please ask questions, as I cannot anticipate, or remember everything.

For the serious buyer, I will supply any pictures desired....

of the pictures I have posted, some are as the car arrived from Phoenix, and heading for the CarNut Museum ... as well as the later pictures back in Artic White ( the wipers were removed for buffing )