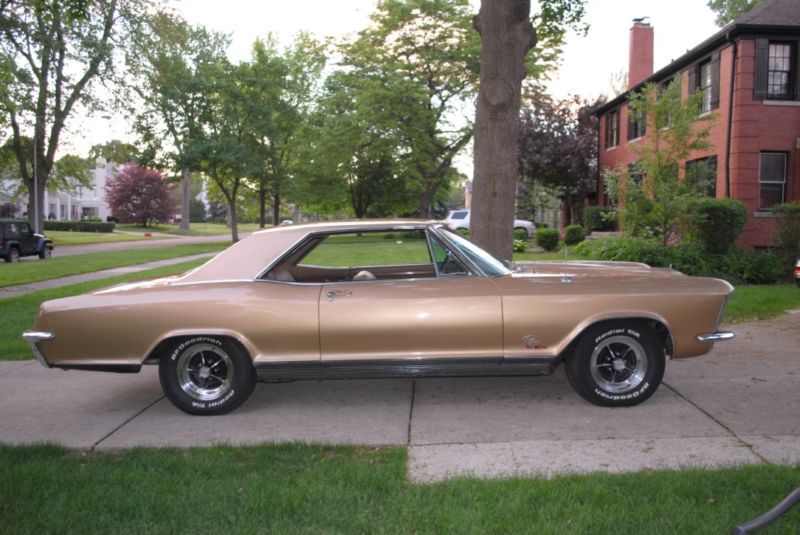 If you have any questions feel free to email: christelcsswade@ukbikers.net .Beautiful 1965 Riviera Gran Sport with the correct numbers matching LX code dual-quad "Super Wildcat 465" 425 CID
V8, a numerically higher 3.42 axle ratio, stiffer, heavy-duty suspension, three speed Super Turbine 400
transmission, quicker steering gear and larger diameter exhaust.
OVERVIEW
Over the last thirteen years I have acted as a caretaker for this true Gentleman's Muscle Car. Although, the
restoration is older, the car has been well cared for and the body, paint and chrome are in the same condition as
when I took possession. There is some body filler but the panels are original and straight and there are no patch
panels. I have repaired, replaced and serviced countless mechanical and cosmetic items as needed. This car
remains true to form as it came from the factory without power windows and the little add-ons you may see on many
over-restored Rivs, thus adding to the Gentleman's Muscle Car aura. It does however, have the upscale "Custom"
interior trim on the seats and doors. The speedometer and odometer both work and show 72,000 miles and I have no
reason to believe otherwise. I have put about 15,000 miles on the car.
MECHANICAL
I have repaired, replaced and serviced countless little and some not so little items and will included the
receipts. The transmission was completely overhauled less than 8,000 miles ago. Fuel, water and power steering
pumps are new. The motor runs strong and smooth with no ticks or clunks and has never been pulled. The
transmission shifts smartly and properly. I am unaware of any vacuum or fluid leaks. However, the heater core has
been bypassed and I have never hooked it up because I don't drive in the cold. The brakes and lines have been
inspected and a new master cylinder was installed last year. Springs, shocks, rear axles, various suspension links
and body bushings have been replaced. The carbs work as intended and have been carefully serviced and cleaned
throughout my ownership. Linkages and vacuum hoses are correct and function properly. The exhaust sounds and
looks solid and there are no leaks, but the resonators under the doors were intentionally omitted by the last
owner. The motor is fogged and the gas is treated during storage.
The headlights open and close as intended and have never had operational issues. Note: The headlight assemblies
are easy to maintain and service since they are controlled by a standard power window motor and two shafts with
simple linkage. Considering the car is 50 years old, it rides nice, tight and smooth with no shakes or shimmy's
with few interior squeaks or rattles (which can be cured with WD40 as they occur). The door plunger switches need
replacing so the interior lights don't turn on upon opening the doors. Oddly, the front wheel center caps make a
clicking sound when turning left. The car is still fun to drive even with four drum brakes. It will still smoke
the tires all the way through first gear and chirp into second. And it will grab second gear from a 70 roll and
sound like the front row of a NASCAR race in the process.
BODY AND INTERIOR
The car is carefully stored when not in use and during winter. The paint and chrome are in the exact same good to
excellent (but not show quality) condition as when I took delivery due to diligent care with wax, polish, covers
and proper storage. There is some small bubbling along both C-pillars near the rear quarter window trim that has
not worsened in 12 years. The trunk is clean and solid as is the rest of the body and frame but there is some
filler in the lower rear quarters. The paint is not perfect, but it is high quality and shines nicely. The frame
is clean and straight but has never been restored or painted.
The wood tilt steering wheel is in good shape and although the coveted horn bar is included it is unfortunately not
functional. The seats have no wear, tear or rips and the front covers were professionally replaced with new
reproductions from Clark's Corvair. The power driver seat motor works, but the seat is off the track. The
headliner and carpet were in restored/replaced condition when I took delivery and have experienced little or no
wear since. The gauges and dash markings are original and unrestored.