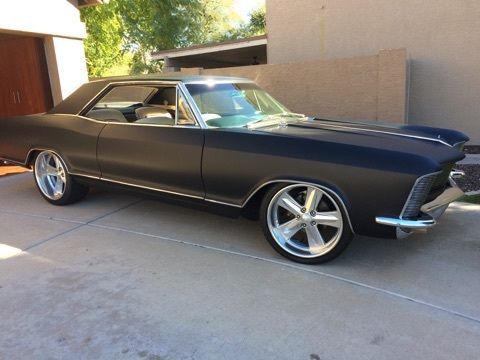 Please email me with any questions or requests for additional pics or something specific at: margotmrrooke@ukmm.com .

The 1965 Buick Riviera. The only year the front headlights are hidden in a clamshell.
Complete Restomod. Real Head turner! i take to local car show and always a buzz and pictures taken. This is the
perfect gangster car. Black matte wrap, custom interior of leather and suede, absolutely no rust!! Shaved door
handles with remote that pops doors. LS1 fuel injected motor, power seat, power windows, backup camera, bluetooth,
custom interior lighting with remote. JL Audio speakers, amp and sub, billet grille and kill switch. Great chrome,
finished trunk, brand new Michelins all around, and deep dish boyd coddington rims. ANYONE can have a vette,
chevelle, camaro, or gto. but when you go to car show. you wont see another custom riviera like this! BTW-it sounds
amazing thru it's custom exhaust. I do not race, i cruise. drives like a caddy. It also is always garaged. I have
had it for about 6 months and its starts up first time, every time. Selling, baby on the way.