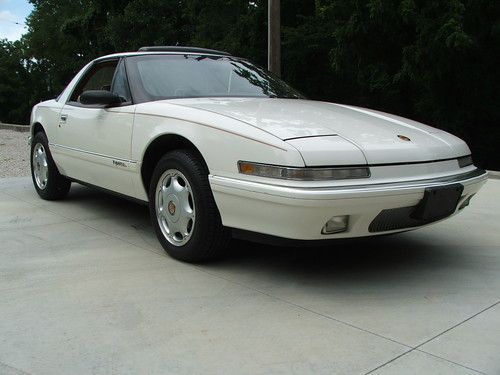 THIS IS A VERY NICE 1991 REATTA , IF YOU KNOW ABOUT THESE HAND BUILT CARS, YOU KNOW THAT 91 WAS THE LAST YEAR AND ONLY ABOUT 1200 COUPES WERE BUILT.  THE 91 MODELS WERE THE ONLY YEAR TO HAVE CONVENTIONAL  BRAKES. THEY HAD 3 OPTIONS, AND THIS ONE HAS ALL THREE,,, POWER SUNROOF, CD PLAYER AND 16 WAY POWER SEATS. THIS CAR IS IN VERY NICE SHAPE. I HAVE 1 SET OF KEYS AND 1 REMOTE.

NEW TIRES, NEW BRAKE JOB, VERY NICE CUSTOM STEREO (HAVE THE ORIGINAL ALSO) I HAVN'T FOUND MUCH OF ANYTHING THAT DOES NOT WORK ON IT. RUNS GREAT, STARTS RIGHT UP ON THE FIRST CRANK,,,, ALL WINDOWS, LOCKS, SEATS, LIGHTS, ECT WORK AS THEY SHOULD. THE PICTURES TELL THE STORY OF THE CONDITION OF THE CAR. THER IS SOME SUN FADE ON THE CARPET AND THE DRIVERS SEAT IS SHOWING SOME CRACKING BUT NO RIPS , TRUNK HAS ORIGINAL SPARE,JACK AND WRENCH, VERY CLEAN CAR.  PAINT IS VERY NICE BUT NOT PERFECT. THIS WILL BE A VERY NICE DRIVER QUALITY CAR THAT COULD BE SHOWN IF THE NEW OWNER WISHES. NO LEAKS OF ANY KIND.

I AM ABOUT 50 MILES NW OF LOUISVILLE KY,, ZIP 47469.  I REQUIRE  A $500 DEPOSIT VIA PAYPAL AT THE CLOSE OF THE AUCTION AND CASH ON PICK UP, WITHIN 10 DAYS. PLEASE BE SERIOUS WHEN BIDDING AND HAVE FUNDS IN ORDER. PLEASE E-MAIL FOR ANY DETAILS OR TO MAKE AN OFFER.