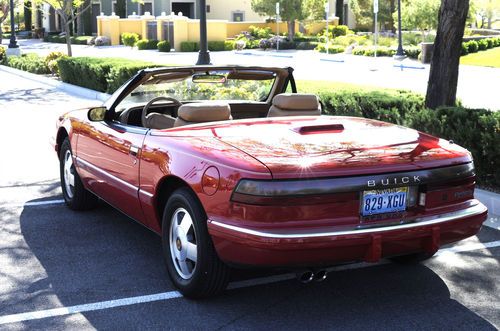 This auction is for a low mileage, near show condition Reatta convertible.  I am the third owner of this Florida-California-Nevada car that has probably never seen snow.  It drives beautifully and there are no mechanical issues other than about two drops of oil per week.  Everything works as it should.  As you can see from the photos, the paint is excellent.  The convertible top and tires are nearly new. It has a very nice custom dash cover over a perfect dash. The leather seats are perfect.  The only issues with the body include one small dent in the right rear quarter panel (see photo), some scuffing of the finish on the allow wheels and a missing trim piece on the trunk lock (lock works).  I have purchased a replacement trunk lock which will be included.  Also included will be the owners manual in its beautiful leather case.  I have really enjoyed this car - I am selling because I need garage space.  Please email any questions.  Thank you for checking this listing.