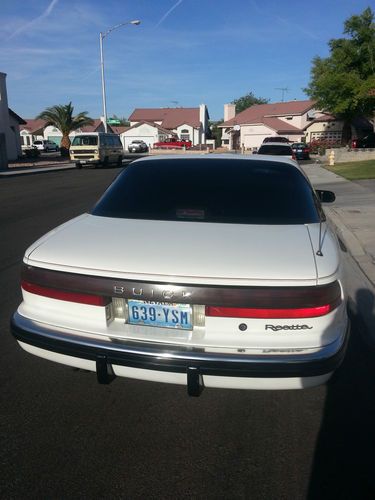 Owned by a non-smoker, 79 years of age.  Does not drive anymore, and has always been garaged, and GENTLY driven.  Oil changes & services always done on time.  Recently, the car passed Nevada smog check, had all the windows tinted (35% on the sides and limo on the rear and top of the windshield.)  I get compliments and inquiries on the car all the time.  I hate to sell it, but I have no use for it anymore.  It was my daily driver, and it never let me down.  A very nice car that can only increase in value.  I am happy to answer any questions you may have regarding the car, as best as I can.  I have the owner's manual, but the binding came loose from age.  Two miles from my house a used car dealer has the identical car in virtually the identical condition and is asking $7,295, so I am very realistic and fair in what I am asking   In that it is a  private sale, there is no sales tax, of course.  The title is clean, from Nevada, and there are no loans or liens on the car.

What makes the car great----prettiest color combo (white/burgundy) rare, sought after model by collectors, cost over $30,000 when new in 1990, economical to drive, dependable, parts are cheap (other GM cars from the same year came from the same parts bin), car just had an oil change/filter, had a tune-up with new spark plugs, had the air and fuel filter changed, is garaged (so the original paint is shiny) and detailed every two weeks, the headlights work properly (just had repaired), the digital dashboard is working properly, as are the power windows, power seat, power mirrors.  Has the original rims with the original centers (they're expensive), and the tires are good, having just had an alignment, balance, and rotation so the car is smooth at 80 mph.  The car has spent its life in the South West, thus, it is not some rust-eaten clunker from snow states.
What makes the car less than showroom perfect:   windshield has a vertical crack on the extreme right side, check engine light came on (passed smog anyway), passenger seat was torn by a razor when someone broke in and tried to take the car, the driver's door was replaced and part of the rear quarter panel was painted, thus there is a slight shade difference in that area and the power door locks/alarm were not working since,  back when the car was new, I learned from the auto check report that the hood was fixed, explaining some paint variance on that as well.   the radio works intermittently, and the cassette doesn't work, the A/C isn't working properly, although the compressor is running.  When you put the car in reverse, it sometimes is less than smooth as it shifts into that gear.  One of the horn buttons fell off (I have in the trunk).  There might be other things I am not aware of, since I am not a mechanic, but nothing else is obvious to me, for it were, I would list it here. The power antenna is disconnected, because when I connect it the motor keeps running even though the antenna is at its full height.
The car is obviously almost 25 years old, so expect it to need renewal of parts due to age, so the car is being sold as is, no returns, and you are responsible for arranging shipping or you can pick it up yourself and drive it home.