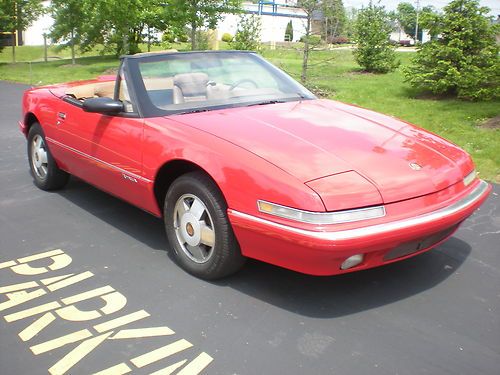 Up for auction with NO RESERVE is this 1990 Buick Reatta Convertble!  I am listing this car for a freind who recently purchased a newer vehicle and wants to sells his car with No Reserve!  His name is Lou and if there are any questions you can call him direct at 215-360-7315.  This is a nice fun car to drive!  Mechanically the car runs and drives nice!  It drives very good on local roads and at major highway speeds!  The 3.8 engine runs smooth and strong!  The automatic transmission shifts perfect through all the gears!  The vehicle is straight and solid!  He recently had the entire car repainted and it looks bright and fresh! (The paint is the original buick red!)  Also he recently installed a brand new top with rear glass and defrost!  The interior is in good shape with normal average wear!  All the interior options and powers work with the exception of the doorlocks and sideview mirrors..  Also he beleives the a/c needs a charge of freon.  Both the engine and trunk compartments are clean and in nice shape!  The headlights work nice as they should!  All the dash gauges and lights operate as they should!  Overall this is a nice enjoyable Reatta Convertible that looks nice and runs great!  Could use just a little TLC. This will make a great weekend car or for everyday personal use!   The car will be sold to the highest bidder so please bid to own!  Thank you!  Once again if there are any questions or concerns you can call Lou at the number listed above.  Good Luck!