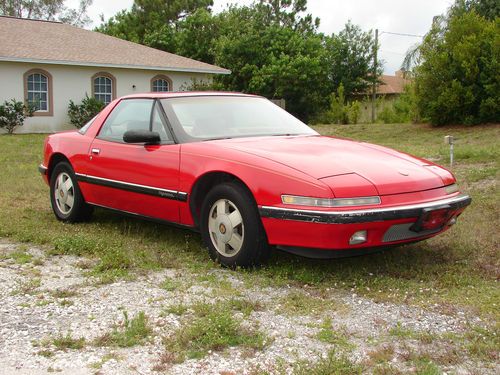 NICE BUICK REATTA 2 DOOR SPORTS CAR WITH THE 3.8  ENGINE, RUNS GREAT AND SHIFTS GOOD, FACTORY ORIGINAL ALUMINUM WHEELS WITH DECENT TIRES, INSIDE IS NICE FULLY DIGITAL DASH AND GAUGES WITH TOUCH SCREEN DIAGNOSTIC CENTER, POWER EVERYTHING SEATS, CRUISE, WINDOWS, A/C, MOONROOF, MIRRORS, TILT STEERING COLUMN AND MORE, CONSOLE SHIFT AUTOMATIC,ALL WHEEL DISC BRAKES,  NICE CLEAN LITTLE 2 SEATER SPORTS CAR, BLAST TO DRIVE AND EVEN GETS DECENT GAS MILAGE, PAINT IS PRETTY GOOD , BLACK BUMPER TRIM NEED TOUCH UP, NEEDS JUST ALITTLE CLEAN UP TO MAKE VERY, VERY NICE,  I CAN STORE THE CAR FOR FREE FOR A REASONABLE AMOUNT OF TIME THAT IS AGREED UPON BEFORE THE AUCTION ENDS, WINNING BIDDER IS RESPONSIBLE TO ARRAING FOR AND PAY FOR ALL TRANSPORTATION AND SHIPPING COSTS, IT IS IN A COMMERICIAL AREA SO TRUCKS CAN GET TO IT, AND WE CAN HELP GET IT LOADED, IF YOU HAVE ANY QUESTIONS JUST SEND THEM THRU EBAY AND I WILL ANSWER THEM AS BEST AS I CAN , YOU ARE MORE THAN WELCOME TO COME AND LOOK AT THE CAR IN PERSON BEFORE THE AUCTION ENDS, IF YOU ARE PICKING THE CAR UP IN PERSON CASH WOULD BE GOOD AND ALL FUNDS HAVE TO CLEAR BEFORE THE CAR LEAVES, PLEASE GIVE A $500.00 DEPOSIT THRU PAY PAL AFTER THE AUCTION ENDS AND PAY THE FULL AMOUNT WITHIN 5 DAYS OF THE END OF THE AUCTION, THANK YOU