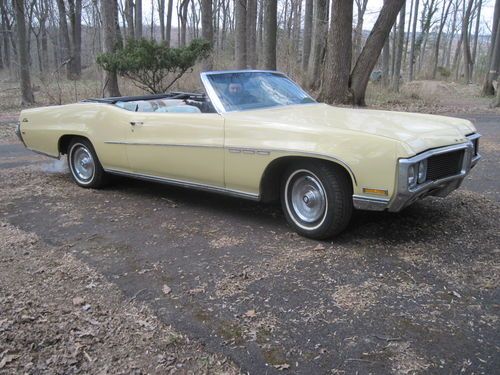 Here we have a 1970 Buick LeSabre Custom Convertable. Paint and body was done 5 years ago. New Top with plastic window also at that time. It has been garaged kept. Cream Yellow  with White and Black interior. Colors of the palm beach edition. Runs Great, engine is smooth and quiet. Drives like a boat. Aftermarket radio/cd/ipod mounted under dash. Car needs to be detailed. Very Reliable. Tires are new. A/C compressor and hoses are missing. Trunk has had a full panel replaced. Has paint cracks were the quarter panel meets valence panel. Left rear window needs regulator. The odometer works but speedo does not. Gas gauge needs sending unit. Needs a few light bulbs here and there. MIssing  emblems on door panels and front bumper. Great Driver and alot of fun. Or fix up as you see fit. Drive it home. Thanks Bart