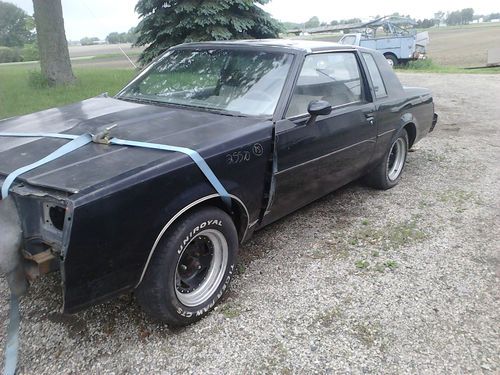 Have up for auction a 1986 Buick Grand National for parts OR restore.

This car was used as a parts car by previous owner.
THIS CAR IS MISSING AT LEAST THESE ITEMS AND POSSIBLY MORE ITEMS;
One of the previous owners made an attempt to add T-tops to this car. This is NOT a T-top car originally.
This car has set inside a garage since 1998. It was last plated in 1995.
The car still has all original drive train in the car INCLUDING BRF code TRANSMISSION and 8.5 Rear End.
The car has a Turbo Charged 3.8 Liter V6.
There are a few odds and in parts in the trunk including, but not limited to;
and other miscellaneous parts.
This car would make a great father and son project, make a great parts car, or help someone find that transmission they been looking for!
This car is 1 of 5,512 made in 1986 and was the FASTEST Production car of THAT year!
This car is being sold as-is, no warranties expressed or implied.
The seller has the right to end this auction at any time because this car is also for sale locally.
I may be able to answer a few questions at the beginning of this Holiday Weekend, but please be patient if All or most questions actually don't get answered until Monday or Tuesday. Thank You for your patience, Steve
On May-29-13 at 14:15:29 PDT, seller added the following information:

Hello, this motor does turn by hand. And this car has a low reserve on it.