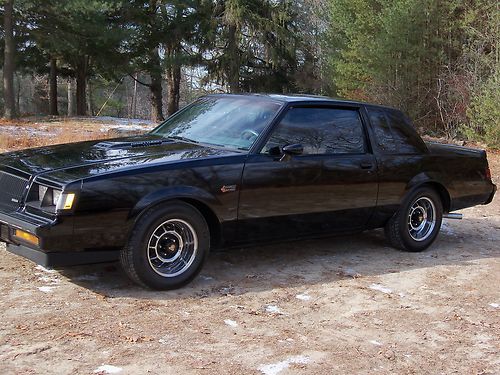 Bidding on a very clean 1986 Buick GN with just over 104K Original miles with only 2 previous owners with a very clean History report, No accidents!!  I can fax you the Carfax if you would like to see it before placing bids. This is one clean GN all restored with 1 repaint, was taken down to bare metal before repainting, no overspray. As most know the factory paint was not known to hold up over the years. Also all Factory bumper fillers which were known to crack have been replaced. This GN also came equipped from the factory with some very nice rare options including the  Astroroof ( CF-5 ) or Sunroof which actually still functions properly, most collectors prefer the astroroof over the T-tops because they did not make many still maintaining the upper structure of the GN, especially in 86 where there was only just over 5k Grand Nationals produced, comparing to over 20K Grand Nationals built in 1987.   Another very nice option was the Limited slip posi-traction ( G-80 ) which is a must have for any GN owner, have driven them without the posi-traction and they do not handle the same at all.  Other options including the light weight aluminum bumper brackets and rear defogger to name a few.  All of these optioned mentioned are also verified on the Service Parts Identification Label found on the inside of the trunk lid.  The engine compartment is one of the cleanest I have seen with no leaks of any kind, Also has been all restored to factory with all new hoses. The 3.8 Turbo sounds great and is mechanically sound with just over 100K miles, will not need anything in the near future, still has more power then you will ever think of using.  The Interior is all Original also and is like Brand New with No tears or stains, no odors of any kind. The undercarriage is all rust-free and does not have any issues, a very clean driver overall ready for the new owner to enjoy. Also has brand new dual exhaust and new tires last year with only 3000 miles on them. To nitpick I would say the rear speakers will need replaced, needs a cig lighter (if needed) and a small piece of chrome is missing off the drivers door interior panel and the Original factory rims could use restored if you want them perfect but look nice for a driver.  Average Nada price is well above my low reserve and these Buicks are appreciating every day. A $500 Non-refundable Deposit is due as soon as auction ends, and the balance in a cashiers check within 7 days or cash when car is picked up, I can hold the car in my garage until the car is picked up but full payment is required within 7 days of auction end. Any Questions please ask before placing bids. I can help with Transporting to anywhere in the US at buyers expense. Only serious bidders please, these auctions are Not cheap, Thanx and Good luck!!