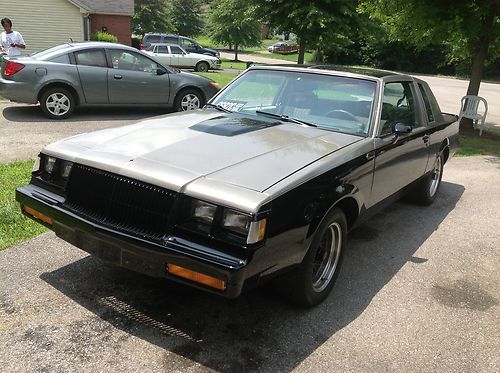 Condition: UsedA vehicle is considered used if it has been registered and issued a title. Used vehicles have had at least one previous owner. The condition of the exterior, interior and engine can vary depending on the vehicle's history. See the seller's listing for full details and description of any imperfections.Seller Notes:"Used!"

Here we have a nice two tone black and metallic silver Buick Grand National T-Type.Body does have a few dings but looks good.It has the original 3.8 231 v-6 engine turbocharged This car has had a recent engine rebuild and currently has around 70 miles since rebuild.It has New speed pro forged pistons were used,new comp cam with springs,lifters and timing set were used.Crank was turned.King rod and main bearings were used as I have heard they were the best for these buicks.New Molly coated rings were also used in the rebuild.The transmission was rebuilt at one time and shifts good.The car has a new upgraded radiator and dual electric fans.Now for the Bad,This GN TType runs strong but will need some sensors replaced.I believe the idle air control sensor needs replaced.Some brake work should be done as the brake light remains on but still runs and drives..The interior and digital dash will also need work.I reserve the right to end this action at any time as this car is for sale locally!