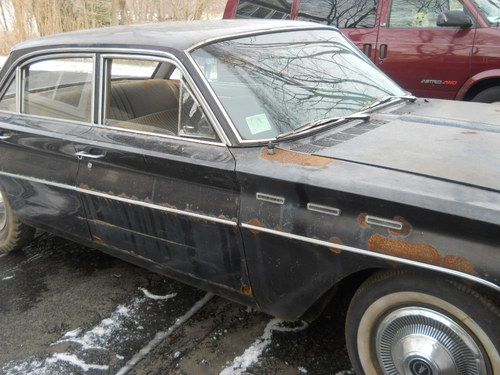 1962 buick special 4 door barn fresh.this car has been in a barn for the past 30 years and needs restoration.surface rust only.motor pops but does not start( we really have not tried).rolls easily .tires hold air.all glass is good ,interior needs restoration, small v8 engine  215 c.i,odometer reads 37,000 .can be seen in manchester,Ct .06040,seconds off of i84.winning bidder must pay a $250 deposite  within 48 hours of auction close to hold car.must be picked up within 10 days unless we make other arrangements.I am listing this for another and he can be reached with ?'s  @ 860 550 5957 mornings or 860 604 4104 evenings.Bring this beauty back to life !! This has a bill of sale only ,as needed in Ct,check with your local state as to what you need!

It looks like the engine and body numbers are matching,I cant see the engine numbers very well but the numbers that I see match some in the other.there is a dent in one fender looks like it would "pop" out fairly easily,The rear bumber is bent looks like it could be fixed as well.