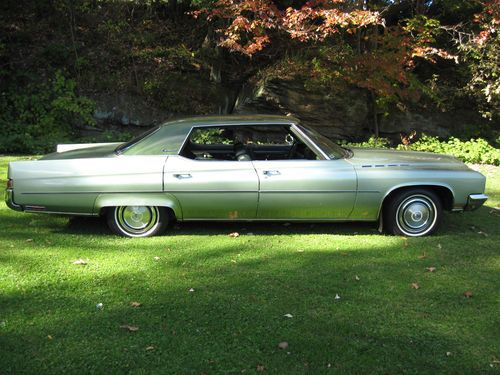 This is a all original unrestored ,super clean 1971 buick electra 225 4 door hardtop, it has 59,953 original miles , it has been stored winters since new ,never driven in snow or salt , so it is rust free!!!!!! the original owners manual,warranty book, are included,  it has the original 455 v8 , automatic, air conditioning, power steering ,power disc brakes, power trunk, am/fm radio, speed alert and tripometer speedometer , and very rare!!!  factory painted roof !!! this is a very nice car, original paint , with maybe a couple minor touchups ,and it shines great !!!,  the interior is immaculate with no wear !!! the chrome on the bumpers,emblems,and trim, shines like new !!! ,it has 4 radial tires that are in excellent shape!!! I don't think you could find a nicer original car it is a survivor !!!! and it draws a crowd at local cruise nights !!!!