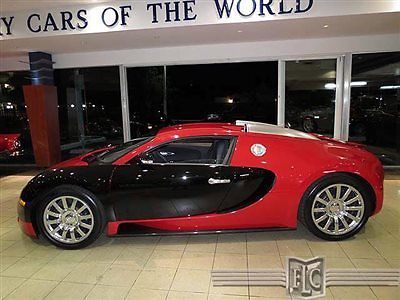 Ettore Bugatti, the automobile designer behind the Automobiles E. Bugatti nameplate, was famed for his engine and vehicle designs. Yet few realize that the Frenchman also worked on a spectacular twin-engine racing aircraft, intended to compete in the 1939 Deutsch de la Meurthe Cup Race, called the 100P. Designed by Louis de Monge, the low wing monoplane featured two engines, both mounted aft of the pilot (nearly end-to-end), driving twin counter rotating propellers through long drive shafts. To achieve its maximum speed, estimated at nearly 550 miles per hour, it was fitted with two powerful inline eight-cylinder engines each making about 450 horsepower.
Sadly, the plane never took flight. Instead, the one-of-a-kind aircraft spent World War II slowly rotting in a French barn, hidden from the Germans. Restored today, but not in flying condition, Bugatti's original 100P sits in the Airventure Museum in Oshkosh, WI.
Seven decades after the original mostly balsa and hardwood aircraft was locked away, businessman Scotty Wilson is leading a team (including Louis de Monge's great-nephew, Lasislas de Monge) intent on seeing an exact replica of Bugatti's 100P "Blue Dream" take to the sky. And that is where Kickstarter comes into play...

Bugatti has been building some of the fastest vehicles in the world since 1909, but its brief history with airplane racing is less well known to many fans. It started in the '30s when founder Ettore Bugatti believed he could build a plane to win the Deutsch de la Merthe Cup Race. He worked on a design called the 100P that never flew. At least, it never flew until a group of Bugatti fanatics called Le Reve Blue decided to build an exact replica of the plane at the Mullin Automotive Museum's Art of Bugatti exhibition. The plane will make its public debut on March 25 in Oxnard, California.
The 100P was on the cutting edge for 1930s aircraft. It used two Bugatti-built 4.9-liter, straight-eight engines with 450 horsepower each to power two counter-rotating props mounted in tandem at the front of the plane. It boasts an estimated top speed of around 500 miles per hour. Other amazing features for the time included the V-shaped tail, forward-pitched wings and a zero-drag cooling system.
Le Reve Blue took on the project in 2009 to create a replica using the same materials and production processes as the original. The group decided to unveil the finished project at the Mullin because of the museum's commitment to Art Deco and machine-age design. It plans to actually fly the plane at some point in the future as well.