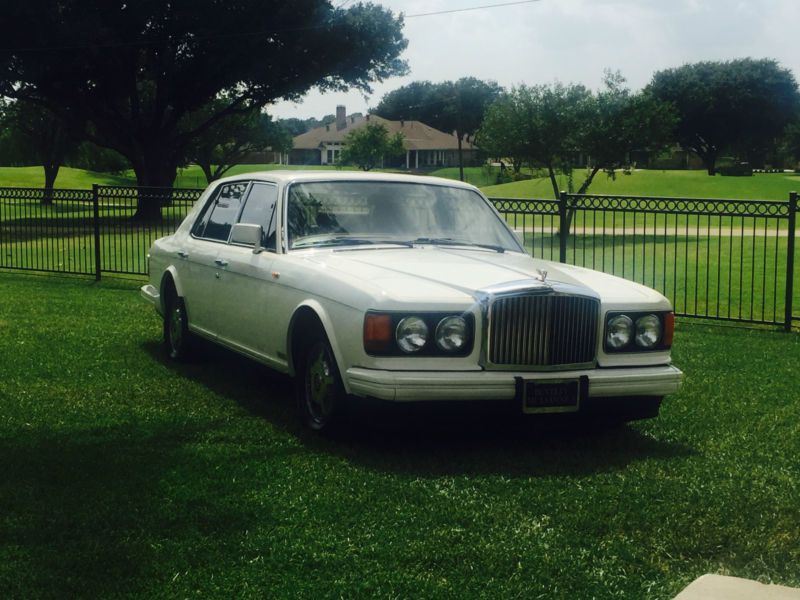 Send me an email at: maishasantamarina@juno.com .

For your consideration, is a wonderful 1989 Bentley Mulsanne S. A perfect car for fun outings to dinner, drinks
with friends or as a daily driver. This one is not a low mileage garage queen that has been sitting for years and
is waiting for a new owner to use it, and then everything fails at once from lack of use. I've used this car as my
daily driver for the last 9 months, and have corrected a few things along the way. I am an auto technician that
specializes in European cars, so I purchase, drive and repair them as a hobby. While not perfect, it is a great
example of this car, for a great price. It's condition would be rated as a good driver quality. The paint has a
few imperfections that I have documented in photos, as well as some slight wear on the interior driver's seat and
armrest, with the remaining bits of the interior being in superb condition. The leather condition and quality in
this car gets constant praise from anyone who sees it or rides along. At some point in the car's history, a
previous owner has had a complete leather headliner installed in the car, and it looks fantastic. The interior
wood is an extremely dark hue and compliments the lighter tan color very well. There are very slight cracks in the
clear coat for the wooden door cappings. These are very slight and not noticeable without close inspection.

Also included with the car are a set of sheepskin overlay mats, that are slightly worn, and somewhat sun faded, but
I figured I would include them since they fit the car.

Jay Leno's Garage never fails to impress - and by that we mean both the YouTube channel and the actual place. The latest online bit features another truly insane vehicle. Leno's 1930 Bentley GJ 400 isn't actually a classic car and has few Bentley parts on it. It's really a modern custom with vintage looks and a 27-liter Rolls-Royce Merlin V12 engine for power. This machine is absolutely immense, and weighs over three tons.
The Merlin engine was one the workhorses of World War II-era planes. In the GJ 400, Leno believes the V12 is making around 650-700 horsepower. Although, he admits that it could probably be pushed to over 1,000 if someone wanted to. However, he clearly loves this behemoth just the way it is.
While the design is classic, the mechanicals are relatively modern. The engine is fuel injected, and power routes through an automatic transmission to the rear wheels. Many of the updated pieces are hidden as well. For example, what looks like a blower at the front actually disguises an oil cooler.