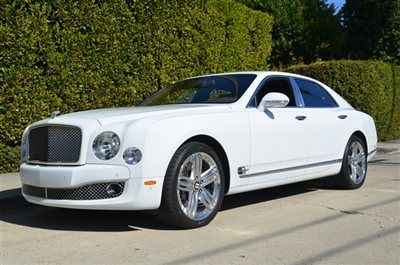 Redefining Super Luxury On A Shrinking Planet
Anyone on Earth with access to the Internet, a television or radio for the last 20 years knows that China is no longer the poor stronghold for strict Communist ideals that it was for much of the 20th Century. (Well, at least not in some places.) Traveling to China twice in less than a month - first to Shanghai for a very international auto show and now to Beijing to drive and review the 2014 Bentley Flying Spur - I've learned that there's no lack of personal wealth, at least in two of the world's largest cities.
And yet, even I think the scene before me is a little bit ridiculous. Here I am, slowly climbing up a hillside to reach a fortification at something called Zhuanduo Pass, where roughly a dozen pristine examples of Western decadence sit idling their hand-built 12-cylinder engines in the shadow of China's revered and awesome Great Wall. Not five kilometers south of here, I'd passed an old man in traditional all-black garb, literally carrying a bundle of sticks on his back from one side of a village to the other. Now as I look through the snug-fitting and silent side glass of the my $200,000+ palace on wheels, I'm more apt to see fat German tourists crisping in the hot Chinese sun while blowing the equivalent of an average Chinese monthly paycheck on lunch and a few Great Wall souvenirs.