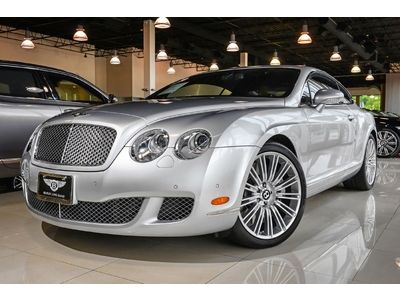 There are few things in this world I enjoy more than an enthusiastic drive down tree-lined backroads on a warm summer evening. If you're familiar with the geographic location of Detroit, you won't be shocked to learn that we don't have the sort of very-involving roads found all throughout California and other gorgeous parts of the country, but we still have some stretches of pavement that can be pretty darn fun when driven in the right car. The vast majority of our scenic roads, however, are of a more relaxed nature. And that's why, despite my tendency to prefer high-strung hot hatches above all, I will never say no to a big, fast convertible during the warm season.
As far as said big, fast convertibles go, perhaps none is more exquisite than the 2014 Bentley Continental GT V8 S Convertible, pictured here in the striking shade of St. James Red. Not long after returning from my trip across the pond to drive Bentley's V8-powered Flying Spur sedan, I was given the chance to sample another one of its eight-cylinder wares, this one carrying less heft, offering a smidge more power, and, oh yeah, a roof that neatly stows behind the rear seats.
As luck would have it, the weather for my Conti weekend was the absolute definition of perfection. And so I took to those sweeping, tree-lined roads way outside of Detroit to see how this Bentley's "S" badge improves upon the lovely GT V8 Convertible I drove last year. Hard work, but somebody's gotta do it.

The eventual arrival of Bentley's upcoming SUV in 2016 will likely prove the most pivotal new product to come from Crewe since the debut of the Continental GT in 2003. And Bentley isn't messing around.
The British automaker is taking aim directly at the Range Rover, saying that it will be just as capable off-road. That's a mighty big claim for a company that has never made an off-roader before, but comes with good reason: Bentley estimates that nearly 30 percent of its customers have a Range Rover as well, and the company is keen to take a slice of that pie.
There are, however, several elements that will elevate the Bentley Falcon (as it's expected to be called) above Range Rover territory. For starters, according to Automotive News Europe, which spoke to Bentley marketing chief Kevin Rose at the Frankfurt show, the Falcon will be more expensive. The sticker price in Europe is expected to hover around 180,000 euros - double the flagship Range Rover's starting price. It'll also be available with four-, five- and seven-seat configurations. And it'll offer more power. A lot more power.

A Bentley seldom lacks for power, but the entry-level, V8-powered Continental GT and GTC will be getting just a bit more when the doors open at the 2013 Frankfurt Motor Show. The 4.0-liter twin-turbocharged V8 in the new Continental GT V8 S and GTC V8 S has been upgraded by 21 horsepower and 15 pound-feet of torque to bring output up to 521 hp and 502 lb-ft. That's no earth-shattering boost, but when you're dealing with a car that weighs over 5,000 pounds, ever little bit helps.
In a rare best-of-both worlds scenario, Bentley has managed to squeeze the extra thrust out of the Audi-derived engine without sacrificing fuel economy, enabling the new V8 S models to cover the same 500 miles on a full tank as the existing Continental GT V8. But the crew from Crewe didn't stop there: they also lowered the suspension by ten millimeters (0.39 inches), stiffened the spring rates by 45% up front and 33% in the rear, tweaked the dampers, fitted a stiffer rear sway bar and recalibrated the stability control, all in the aim of providing a more assertive, engaging driving experience.
The revised models can be identified by their tweaked front and rear fascias, black grille and unique 20-inch wheels. As of right now, it's not clear how much the V8 S will cost over the standard eight-pot Conti, but then Bentleys don't come cheap in the first place. Deliveries are set to begin early in 2014, by which time we hope to have more specifics on price and availability.