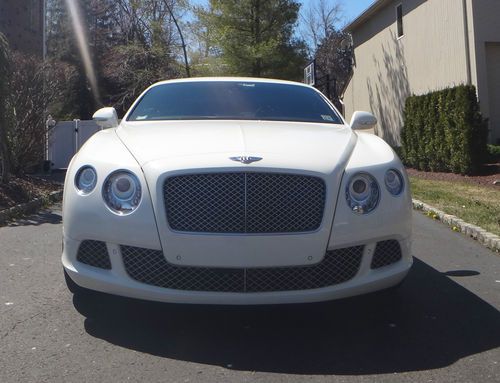 UNDER ORIGINAL WARRANTY TILL APRIL 2014

HAS THE FOLLOWING UPGRADES:
CAR RUNS LIKE NEW!
PRIVATE SELLER
CALL WITH ANY QUESTIONS OR OFFERS 917-567-8268 KODY
NO TRADES

Bentley doesn't do quite as many special editions for local markets as Rolls-Royce does, and when it does, they're usually based on the Continental range. But the new Shaheen edition which Bentley unveiled at the Dubai Motor Show is based on its flagship sedan, the Mulsanne.
Named for and inspired by the Shaheen eagle, the special Mulsanne is distinguished by two-tone Tungsten and Onyx paint, with Magnolia and Beluga leather and dark burr walnut trim inside. It comes already upgraded to the Mulliner Driving Specification, which includes 21-inch alloys, diamond-quilted leather and adjustable suspension and steering.
Of course there are special logos inside and out, and sheikhs ponying up the unspecified premium can also opt for iPad picnic tables, onboard wifi, glass sunroof and a bottle cooler for chilling the champagne that, somewhat ironically, is haram - forbidden under Sharia law that governs many of the countries where Bentley is selling this car.

Bentley has released another teaser video for its redesigned Flying Spur, and the next generation car is looking less like a grown up Continental GT and more like a junior Mulsanne. A viewing of the first teaser vid revealed a more upright grille, a three-spoke steering wheel, horizontal taillights and quarter panels with angles and curves certifiably lifted from the Mulsanne. After this second video, we can add lower door panels with a more aggressive shape, horizontal vents in the fenders and a rear end with the shape of proper haunches.
The English motorcar maker promises us we'll see more on February 20, when "performance and luxury unite." We'll be there in person when the "Camry for rich people" is revealed at the Geneva Motor Show next month. You'll find the videographic appetizer below.