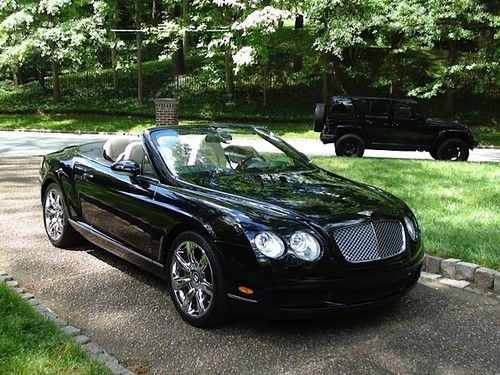 Condition: Used: A vehicle is considered used if it has been registered and issued a title. Used vehicles have had at least one previous owner. The condition of the exterior, interior and engine can vary depending on the vehicle's history. See the seller's listing for full details and description of any imperfections. ...
You will fall in love with this quintessential GTC. This great car shows pride of ownership from fresh tires to full services up to date. This car is being listed on behalf of a great friend and client by the name of Mike, you are encouraged to call or text him on 404.906.3279 to put your deal together directly. He lives in the greater Atlanta area and has the car at his home. Please respect him by keeping contact within reasonable hours based on US Eastern Standard Time.
That all said the history of this car is simple, Mike bought it from his friend who lives in the greater Tampa Bay area. While both he and Mike coveted this car for it's handsome looks, strong performance and brilliant overall condition; there was one incident where the front bumper was touched by a stranger and the bumper skin need to be repainted to keep this brilliant car in top appearance. Mike's friend is an enthusiast but not necessarily a "car dog", so he didn't think twice about calling the insurance company and insisting the front bumper skin be returned to it's original condition no matter the cost. This was great for the car as the original bumper skin was refinished to factory new appearance, but the incident was reported and now shows as part of the CarFax & AutoCheck reports. Mike and I talked about it and decided to be realists and adjust the price of this Bentley accordingly.
You now have the opportunity to purchase a fantastic modern classic that will demand respect everywhere you drive it. Please don't be foolish and contact us asking final price or how low can we go, we can't buy AND sell this car. Mike has agreed to sell this for a very reasonable $95k. If you wish to make an offer please do so by entering your top number via ebay or contacting Mike directly at 404.906.3279. Please prepare yourself to back up your offer with an immediate partial payment via PayPal, Wire or Cash.
Best of luck to everybody, I hope we all make a deal. Let's also remember that this transaction is between you and Mike. I am just listing the car here as a favor. Just for the record, he took the photos as well, mine would have been significantly better!
Cheers,
M3

Porsche's new LMP1 Prototype isn't the only motorsports news coming out of Volkswagen AG this week. After unveiling its new Continental GT3 at the Paris Motor Show last year, Bentley has released some new images and details as this racecar continues its development. Similar to the Porsche announcement, Bentley's new GT3 marks a significant return to motorsports, only in this case, Bentley hasn't raced a car since 2003 - a winning effort at the 24 Hours of Le Mans.
From street to race form, the Continental has dropped about 2,200 pounds by shedding many of the luxury and tech features that make the street-legal Continental GT the car that it is - including 50(!) electronic control units. The Continental GT3 uses the same 4.0-liter, twin-turbo V8 as the road car, but we're guessing output has been tweaked a bit from the standard 500 horsepower. Except for the carbon fiber hood, decklid and doors, Bentley says that the body of the GT3 is a direct carryover from the Continental GT.
Inside, even a stripped interior and full roll cage won't stop Bentley from being Bentley as it gives this racecar the same attention to detail as its road cars - the seats, steering wheel and door pulls all receiving the hand-crafted treatment from the factory in Crewe. There is no word as to when the Continental GT3 will make its racing debut, but more details about the car can be found below in the official press release.

Five years ago, when Bentley was preparing its farewell shindig for the Arnage, reports were that the Arnage's coupe and convertible siblings, the Brooklands and Azure, would get replacements on the Mulsanne platform. Obviously, that hasn't happened, although we were teased with the Mulsanne Vision Concept in 2012. Then, just this summer, we were again teased with rumors of a Brooklands and Azure one-two punch. While it still hasn't happened yet, Bentley's unveiling of the Grand Convertible seems to have put things in gear.
Not 'merely' a roofless Mulsanne, the Grand Convertible appears to be a droptop Mulsanne Speed, powered by a 6.75-liter engine with 530 horsepower and 811 pound-feet of torque, and fitted with the directional wheels only available on the Mulsanne Speed. Finished outside in Sequin Blue with a "liquid metal" hood and windshield frame and a burl walnut veneer on the tonneau cover - a similar combo used to introduce the Rolls-Royce Phantom Drophead Coupé eight years ago - the cabin is covered in Beluga leather with blue cross-stitching.
Company CEO Wolfgang Dürheimer says Bentley is watching customer reaction to the car, yet the press release says it's been "Developed to signify Bentley's intentions for the future." That sounds like better than even odds we'll be seeing this on the roads. For now, though, you can see it in the high-res gallery above, at the LA Auto Show starting this week, and at Art Basel in Miami after that, and you'll find a bit more info on it in the press release below.