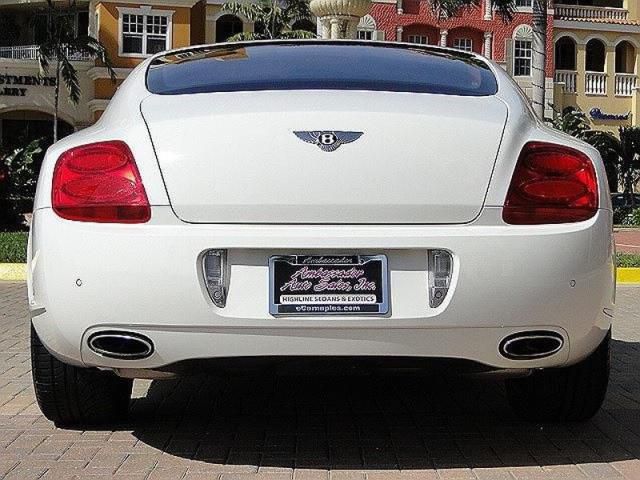 This is a 2005 Garage kept Bentley GT that has 59895 miles on it. All services are up to date as of Sept, 8 2014. Breaks have been replaced last year and I have all receipts and service records. It comes with 22 inch custom wheels and just purchased brand new tires on July, 9. It has the original wheels as seen in the pictures also. I will ship them at no charge. The minor bumper incident was hit on the driver side and Bentley Dealership in Atlanta took care of all repairs, I have all those records also. Airbags did not deploy so it was very minor. I am expecting our second child so its priced to sell very cheap so I can purchase a four door.

A report in Autocar says the next Bentley Continental Supersports will be ready for retail duty in 2014. If true, the coupe is meant to follow the same formula as the first generation, which means weight loss, honed reflexes and "improving braking power," that last one an eyebrow raiser because the Continental series already has some of the largest diameter brakes available on a production car.
A vulgar gain in horsepower isn't planned, however; the Supersports was never primarily about pure grunt, but rather being more connected to the grunt the Continental had. The previous Supersports (Bentley no longer offers it) put out 621 horsepower, but it's said that the coming model will move up to 650 hp, and that would put healthy distance between it and the 616-hp Continental GT Speed.
The Supersports would take a place at the head of the Continental line-up, but be briefly usurped there by a road-going version of the Continental GT3 race car if that comes to fruition. But whereas the street-legal GT3 car would be limited production, the new Supersports would be a series offering.

Bentley is celebrating the 90th anniversary of the 24 Hours of Le Mans with two special edition model. Both the Mulsanne and Continental lines can now be fitted with six new specification packages to mark the event, each named after a famous racer from the automaker's past. Each package one combines select exterior colors with with special interior combinations that pay homage to the gents who took the company's cars to victory in France.
John Duff, Dudley Benjafield, Woolf Barnato, Tim Birkin, Glen Kidston and Guy Smith all get their own namesake packages. You can see the full run down in the press release below. So far, there's no indication as to exactly how much each pack will cost, but we have a hard time imagining a dollar figure scaring off any potential buyers.

Porsche's new LMP1 Prototype isn't the only motorsports news coming out of Volkswagen AG this week. After unveiling its new Continental GT3 at the Paris Motor Show last year, Bentley has released some new images and details as this racecar continues its development. Similar to the Porsche announcement, Bentley's new GT3 marks a significant return to motorsports, only in this case, Bentley hasn't raced a car since 2003 - a winning effort at the 24 Hours of Le Mans.
From street to race form, the Continental has dropped about 2,200 pounds by shedding many of the luxury and tech features that make the street-legal Continental GT the car that it is - including 50(!) electronic control units. The Continental GT3 uses the same 4.0-liter, twin-turbo V8 as the road car, but we're guessing output has been tweaked a bit from the standard 500 horsepower. Except for the carbon fiber hood, decklid and doors, Bentley says that the body of the GT3 is a direct carryover from the Continental GT.
Inside, even a stripped interior and full roll cage won't stop Bentley from being Bentley as it gives this racecar the same attention to detail as its road cars - the seats, steering wheel and door pulls all receiving the hand-crafted treatment from the factory in Crewe. There is no word as to when the Continental GT3 will make its racing debut, but more details about the car can be found below in the official press release.