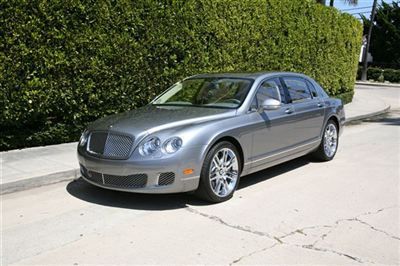 Does Bentley have room in its Continental GT lineup for an even more extreme version than the new GT3-R? Luc Donckerwolke seems to think so. Speaking with Autocar, the Bentley design chief suggested that an even more performance-focused Continental GT could be in the works, potentially ditching the heavy all-wheel drive system in an effort to further reduce weight, improve handling and drop even more ticks off the 0-60 time that's already down to a best-yet 3.6 seconds in the GT3-R.
To borrow a page from the same playbook used not only by sister-companies Audi and Porsche but also by Renault and Jaguar (to name just a few), we'll tentatively call it the Continental GT3-RS. Whatever the name, though, power would likely come from an even more potent version of the 4.0-liter twin-turbo V8 co-developed with sister-company Audi. Considering that engine already produces 500 horsepower in the Continental GT V8, 521 hp in the V8 S and 572 hp in the GT3-R, we could be looking at as much as 600 horses to make it the most powerful V8 model to date. With that much juice, it would even eclipse some of the W12 models that start at 567 hp in the core Continental GT and range up to the 616 hp in the Speed, which currently ranks not only as the most powerful Conti yet, but also the fastest road car Bentley has ever made.
Donckerwolke says that Bentley has already sold the entire production run for the Continental GT3-R and that customers are already clamoring for something more focused. Younger buyers are likely to be even further drawn to the brand by the ne-plus-ultra Conti, especially if the racing team advanced from its current fifth place in the Blancpain Endurance Series standings.