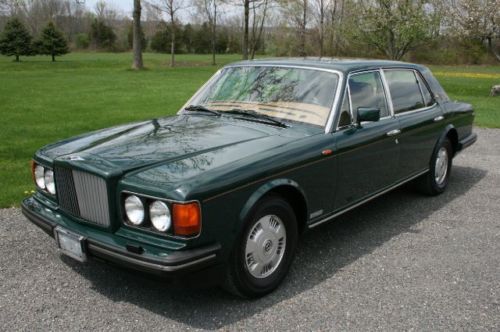 Bentley purists have probably been tearing their hair out since we got our first glimpse of the EXP 9 F SUV Concept. "A Bentley SUV? " you could almost hear them saying, incredulous to the idea that an automaker actually wants to make money. Now, word is that the British brand might be jumping on the four-door-coupe bandwagon. The car, which would slot in below the Continental GT, and act as the new base model, would compete with the BMW M6 Gran Coupe and Mercedes-Benz CLS63 AMG, according to Car.
Size-wise, Car thinks it'd be in line with the Continental GT, at just over 15.5 feet long. It'd wear a price tag of 125,000 to 150,000 euro, which converts to $168,650 to $202,380. In reality, the US-spec baby Bentley would need to retail for no more than $130,000 to $170,000 if it wanted to truly capture the M6, Porsche Panamera and CLS63 crowd. Speaking of that Porsche, Car thinks the Bentley will ride on the same platform.
As is pointed out, the question of which platform this new model will ride on is an important one. The two possibilities are the D5 architecture of the next Audi A8 or the MSB platform, which will underpin the next-generation Panamera. Expect a 3.0-liter V6 and a 4.0-liter V8, both of which will receive special outfittings for duty in the Bentley, when it arrives in 2018. What do you think? Is there room in the Bentley family for a car below the Continental GT V8, and if so, is a four-door coupe the right choice? Let us know down in Comments.

Wolfgang D?rheimer retakes the reins at Bentley and Bugatti

Wolfgang Dürheimer is still in play, with Bentley Motors announcing that he will return to the Chairman and CEO slot of the English company and French division Bugatti on June 1, 2014. He'll probably remember those chairs from the last time he filled them, since he was promoted to both positions in 2010 and remained there until September 2012, when he was installed as the head of R&D at Audi. That job only lasted until June of 2013, his nine-month tenure reported to be full of corporate drama that lead to his dismissal from the position.
But as if on gardening leave, he's been in the low-profile position of General Representative of the Volkswagen Group responsible for motorsport. Once back at Bentley, he will take over as the company works on getting its SUV to market and expanding its range. Both of those briefs Dürheimer will know well, having proved his ability at Porsche in the first decade of the new millennium. And even though no longer at Audi, his hybrid days don't appear to be over, as Bentley recently announced that it will hybridize of 90 percent of its lineup.
Dürheimer will also take on a third position, joining a VW Group committee focused on the US and Chinese markets. His successor at Bentley and Bugatti, Wolfgang Schreiber, has been promoted to "a leading position within the Volkswagen Group." There's a brief press release below with the official words.