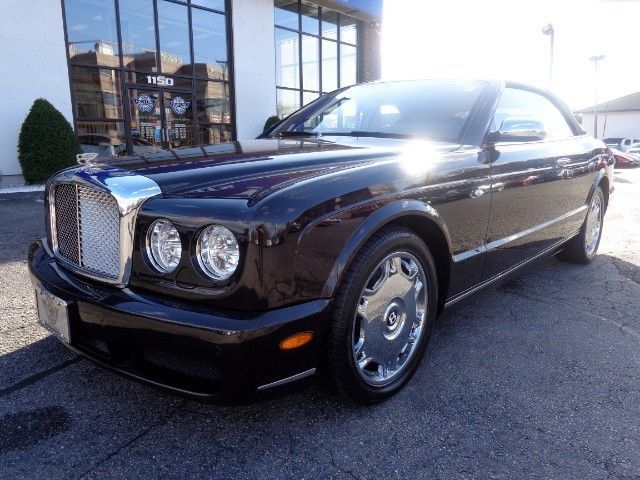 The Azure uses a traditional Bentley 6.75-litre
twin-turbo V8, as seen in the Arnage saloon. And it retains the unique Bentley character of effortless power.
Revving to 4,500rpm, the cabrio has a seamless auto gearbox to drive the rear wheels. A massive 875Nm of torque
ensures the car offers incredible acceleration, despite its 2,695kg weight. It records the 0-60mph sprint in 5.9
seconds. However, Bentley's engineers have also concentrated on body stiffness, which is crucial for a roofless car
of such vast proportions. While it's far from agile, handling is safe and stability good. Body roll is controlled
well, and the steering is acceptable, although the brake pedal suffers from a slightly soft pedal action. The ride,
however, is superbly cushioned. The classic floating Bentley ride is a constant, while the Sport button tightens
the active dampers to reduce this vertical movement. Based on the latest Arnage, the Azure four-seat convertible
uses the same 6.75-litre twin-turbo V8 as the saloon. Engineers have improved body stiffness over the old model,
which is crucial for a roofless car of such vast proportions. As well as traditional strengthening in the sills,
A-pillars and underbody, the Azure has two unique carbon fibre crossmembers linking the front and rear subframes.

The 200 MPH Club was once populated entirely by exotic sports cars. These days it has expanded to include convertibles, sedans and even station wagons. But an SUV? Unthinkable, what with their aerodynamic profile approaching that of a barn door. Bentley, however, is out to change that with its forthcoming new sport ute.
Not only is the British automaker aiming to make its first SUV fully capable off road, it's also engineering it to be one of the fastest on the road as well. According to emerging reports coming in from the UK, Bentley is streamlining the SUV's shape with a lower roofline and reprofiled rear end and fitting it with advanced underbody aerodynamic aids in order to compensate for its over-six-foot width and get it up to the magic 200-mph mark.
Reaching out to Bentley for comment, its communications office wouldn't divulge such performance targets: "The SUV is in the engineering development stage, so unfortunately it's too soon to discuss performance figures," we were told via email. "It will of course have all the power and performance that one would expect from a Bentley!" If the information proves correct, however, at that speed, it would be able to keep pace with the faster members of the Continental family, but leave the Mulsanne flagship sedan (which is already approaching the size of an SUV) and its 185-mph top speed in the dust - not to mention the Porsche Cayenne Turbo S that is quoted at "only" 175 mph.