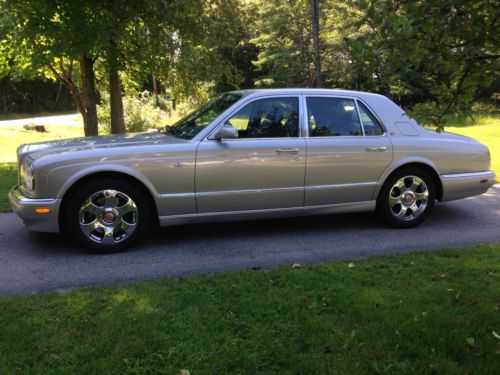 The top end of the new car market seldom seems to need much justification for rolling out a new special edition - other than bringing in a few extra bucks and making its customers feel extra special in the process. Bentley, for its part, is celebrating its 95th anniversary this year, and to mark the occasion has released a special edition of its top-of-the-line Mulsanne saloon.
Called the Mulsanne 95, the limited-edition limo gets three very British color options, dark-tint finish for the Flying B hood ornament and special 21-inch wheels. Step inside and you'll find two-tone blue and white leather with red top-stitching, with a 95 motif embroidered into the seats and special illuminated treadplates, all offset by special Fulbeck Walnut panels that come from a single, giant walnut tree some 300 to 400 years old that came down in a storm in Lincolnshire in 2007.
Buyers will be able to choose between Britania Blue, Empire Red or Oxford White, but only 15 examples will be made available, and all exclusively in Bentley's home UK market.

Last time we saw the 2014 Bentley Continental Flying Spur out testing, our only questions about the new car regarded its rear-end styling, and when the car would debut. Well now we know for certain that the car will be unveiled at the Geneva Motor Show, and we're also getting a better idea of what the car will look like thanks to Bentley releasing a brief teaser video.
The easiest-to-spot detail that we see in this Flying Spur video is the car's horizontal taillights - the first such on a Bentley since the 1990s. We can also see that this hyper-luxury sedan will get a more squared-off front end than its Continental GT counterpart. But, from what we can tell, it will receive a similarly laid out interior, including the three-spoke steering wheel.
Scroll down to watch the video, and we've also attached the single-sentence press release in which Bentley promises to reveal more details about the car on February 20.